Social Security and Medicare the target, and Republicans won't fix it.

Besides the recent GOP tax cuts that lowered our payroll taxes, stagnant wages and fewer workers supporting seniors on Social Security and Medicare in the future will have a lasting negative impact. So is it any surprise the programs may have looming funding problems?

The Democrats warned voters about Paul Ryan's not so hidden agenda behind the tax cuts (besides letting people who have tons of money to keep even more it); he wanted to cut our major self-funded insurance programs via lies about their solvency, retain the current cap on income, and ignore the declining worker support for the programs.


A new report on Social Security and Medicare finds that the system is now paying out more than it brought in, forcing the system to dip into its $3 trillion pool of reserves — for the first time since 1982.

Ryan set this up and is now retiring with a smile on his face, because he knows his dream cuts are inevitable:


Overall, it suggests that taxes to fund systems for retired or disabled Americans either have to go up, or benefits have to eventually be cut. Today, there are 62 million people in the Social Security System, a number that'll jump to 90 million by 2040. And by then, there will be fewer workers supporting those beneficiaries.

Trickle Down Voodoo will Save us All? You were waiting for this one, weren't you?

As for Ryan, it's not the unfunded tax cut spending, it's those working-class Americans retiring and the disabled to blame...: 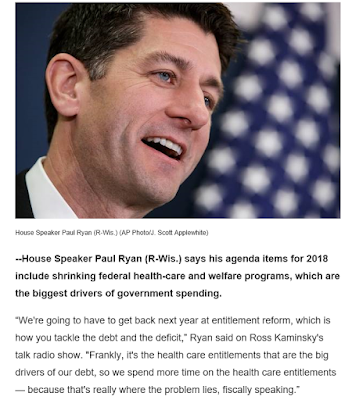 And Sen. Tammy Baldwin said this:

If Social Security, Medicare, Medicaid, and the countries infrastructure cost so much and is running out of money, why are we cutting taxes that fund what we need? 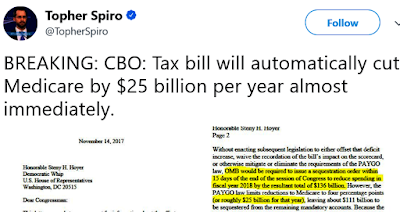 And finally, more and more Americans aren't buying into that old "Democrats are just being partisan" argument anymore. From MSNBC's Steve Benen:

As we discussed a few weeks ago, Critics of the Republican tax plan made several key predictions during the abbreviated debate over the proposal: (1) the corporate windfall would go toward stock buybacks, not capital investments; (2) the package was filled with sloppy errors that would need to be fixed; (3) the plan would be used as a pretext to go after Social Security and Medicare; (4) the tax breaks would wreak havoc on the nation’s finances; and (5) the American mainstream would reject the regressive plan and Republicans couldn’t use the tax breaks as some kind of electoral life preserver. (6) the “pass-through” provision would principally benefit the wealthy, not small businesses. Republicans, at least publicly, made the case this wouldn’t happen. The evidence now points in the opposite direction.