Thanks to HUD's Ben Carson, here's the 16 Most Terrifying GOP Words!

I just want to update an old Ronald Reagan joke about the 9 most terrifying words. Here's my version of the 16 most terrifying GOP words: "I'm from the government and I'm here to make things "simpler, less invasive and more transparent." That's a quote from Ben Carson.

You gotta know you're about to get screwed royally. But it's simpler.

The most unqualified HUD Secretary in U.S. history, Ben Carson, is about to make Scrooge's "are there no workhouses" a U.S. reality: 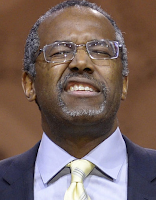 Carson wants Americans living on housing assistance to put more of their income toward rent and he wants to give public housing authorities the ability to impose work requirements on tenants.

Instead of asking 30 percent of a person's adjusted gross income, Carson wants the poor to pay 35 of their GROSS income, in other words, no deductibles for child care or high medical expenses. It's simpler.

What does this mean for seniors 65 and older, and the disabled? Nothing for 6 years, after that, every generation of seniors, the disabled and hard-hit families will get nailed. Thank you Baby Boomers:

HUD officials said the proposal would not impact rents paid by those currently receiving federal subsidies who are 65 and older and those with disabilities, for the first six years. Officials say more than half of the families HUD serves are elderly and disabled.


"The bill would actually increase rents for households that have high medical or child care expenses by eliminating income deductions for those costs. So the greatest burden of the rent increases would be felt by seniors, people with disabilities and families with young kids."


Republicans like Paul Ryan have proposed a similar scheme with Medicare, passing the pain off onto generations that haven't really thought much about their future benefits. But it is simpler, transparent and less invasive.