That 19 to 29 percent of unwavering mouthbreathing Trump supporters appears to represent a gathering of the "There's a Sucker Born Every Minute" club.

Remember when Trump's willing dupes believed high deductibles in the ACA's Marketplace Exchanges was just like having no insurance at all because no one could afford to pay those high out-of-pocket costs?

Yet in direct contradiction to that talking point, and I'm not making this up, Republicans are actually trying to make those unaffordable HSA high deductible plans (with no limits), our go-to free market health care system. The thinking is, HSA's high deductibles will eventually price most sick people out of seeking care (self-rationing). Problem solved? If they're going to "die, they had better do it, and decrease the surplus population." -Scrooge

And we'll be able to thank Scott Walker and AG Brad Schimel's lawsuit to repeal the ACA for forcing us to take whatever money we saved on taxes and give it to insurers, doctors, and hospitals. And yes, this is all part of Trump's empty/broken promise to provide complete and affordable health care to every American.

The Preexisting Condition Death Certificate: Showing just how much they didn't understand the old unpopular health care system before the ACA, Trump Party Republicans for some reason want to go back to the good old days of losing insurance and bankruptcies.  WPR:


Schimel said his office was taking the lead on a multi-state suit that seeks to overturn the Affordable Care Act, a move he conceded would end protections for people with preexisting conditions.

Schimel: "Without the individual mandate it all fails. It's not going to be able to stand. We've asked the court to stay Obamacare across the board."

...he said with a detached sense of glee.

Oh, and Schimel's sense of urgency to finally rid the state of our costly and devasting opioid crisis?

Schimel said he would only join a multi-state lawsuit against opioid manufacturers as a last resort.

I know it's crazy, but Democrats think health care should be a shared group cost for every American, where no one goes bankrupt, drains their kid's college savings, or dies prematurely because they can't afford it. It's the kind of socialism Republicans say will destroy our country, right? Democratic AG candidate Josh Kaul took issue with Schimel's "logic."

Here's a great list of reasons why this is so important: 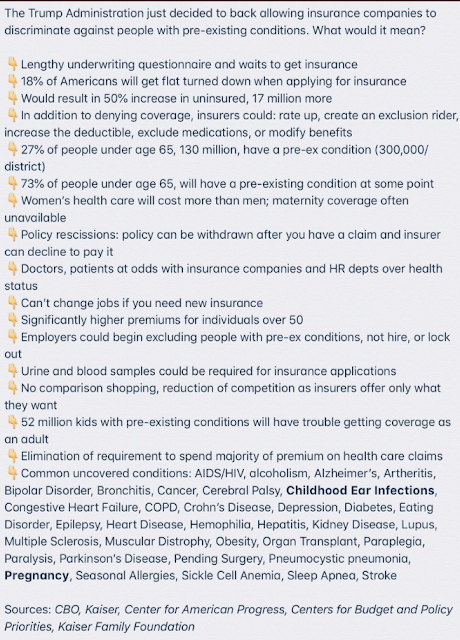