The Trump Party: It's an official cult:


Sen. Bob Corker (R-Tenn.) fessed up: “We’re in a strange place. It’s becoming a cultish thing, isn’t it? It’s not a good place for any party to have a cult-like situation as it relates to a President that happens to be purportedly of the same party. To have an administration that wakes up every day on an ad hoc basis just making stuff up as they go along with no coherency to it — I think us having to weigh in on that would actually cause them to have to think about what they’re doing versus, ‘Well, I’m upset with X today so I’ll do this.’ ”

After all, the Trump Party said so...

The Republican National Committee chairman Ronna Romney McDaniel added a creepy, totalitarian note. “Complacency is our enemy. Anyone that does not embrace the @realDonaldTrump agenda of making America great again will be making a mistake,” she tweeted. Pyongyang or Moscow or Beijing propagandists would be proud. You must embrace our leader, or else!

Many Republican voters have morphed into zealot Trump Party cultists, buying into the myth that politicians who don't help solve their problems are just believers in small government. Conservatives and rural voters are losing everything just so they can get rid of one or two regulations they hate:


Economically dislocated Americans: right-leaning or independent voters who harbored no great love for the president, but whose communities are unrecognizable to them now, mainly because of automation and global competition and all the social ills they wrought, like broken families and addiction. The culturally affronted crowd you see reflected on social media all the time ...These voters don’t think much about an economic future; they want a time machine that will take them back to an orderly America ruled by white dudes, where you could say whatever you wanted without being labeled a bigot or a sexist, where you didn’t have to worry about gay rights and women’s rights, and where black guys getting dragged out of a coffee shop for no reason was called Wednesday.

Think about it, the Trump Party's politics of resentment has directed voters to cut their own throats: 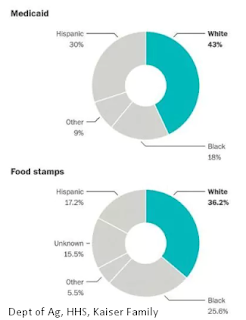 The findings suggest that political efforts to cut welfare programs are driven less by conservative principles than by racial anxiety, the authors conclude. That also hurts white Americans who make up the largest share of Medicaid and food-stamp recipients. President Donald Trump and Congressional Republicans have proposed deep cuts to both programs.

Perpetually outraged Republicans who attacked "King" Obama's overreach were only angry because it wasn't their "12-year-old bully" king doing it:


WaPo: Sandra Jones thinks his tough talk has done some good and intimidated dictators around the world. “I don’t want to sound disrespectful, but as dumb as he sounds sometimes — when he goes up there and acts like a 12-year-old bully — I think at the end of the day, he has good intentions."

Obama was ridiculed for the slow economic recovery, yet Republicans who did nothing until the tax cuts, are oddly now taking credit for it:


Bill Campbell understands why Trump has threatened to pull out of the trade agreement with Mexico and Canada, rejected a huge Pacific trade pact and announced new tariffs on imported steel and aluminum — to exert American authority on the world stage. If those changes actually go through, prices on groceries and other items will probably go up for consumers like him and that there might be less work for truckers and others who rely on the steady flow of goods through the port. He said such sacrifices are worth enduring now for the long-term good of the country.

Standing by and groveling at the Feet of their Orange Idol Trump:


In Nevada, brothel owner Dennis Hof, the star of a TV show about prostitution and the author of “The Art of the Pimp,” blew past a Republican incumbent to win the nomination for a seat in the state legislature. In an interview, Hof said that Trump “blazed the trail” for him. “He gave me the confidence that I could do this — I could be a reality TV star, an author and a brothel owner and then be elected to serve,” said Hof. “I want to keep the stuff that the president’s got going.


Arizona: With 83 rural hospitals having closed nationwide since 2010 and hundreds more in jeopardy, many rural healthcare experts and some policymakers want to see more rural communities with struggling or closed hospitals do what Douglas did, make an exception for rural providers (to charge a higher fee) that open free-standing emergency departments (EDs) replacing shuttered hospitals. Nearly 20% of U.S. residents live in rural areas, according to the Census Bureau ... Expanding Medicaid to low-income adults in the 18 states would help rural providers.

Our own state Republican candidates proudly declare their unquestioning loyalty to their orange malignant narcissist: