Funny thing, my conservative friend in Milwaukee still hasn't texted me about the quarterly growth numbers, or a belated hoorah about last months lackluster job growth numbers. He was quick to do that about the January and February jobs numbers though. "We won, get over it," right?

But Trump supporters do this all the time. They can't wait to rub it in our faces, anything and everything that happens under Trump, their president.

Back at you...it's the slowest quarterly growth in 3 years. 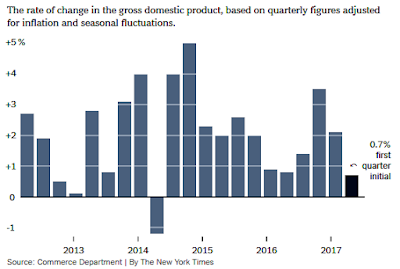 ■ The economy barely grew, expanding at an annual rate of only 0.7 percent. The first-quarter performance upset expectations for a Trump bump at the start of 2017.
■ The growth was a sharp decline from the 2.1 percent annual rate recorded in the final quarter of last year. It was the weakest quarterly showing in three years.

■ Consumption, the component reflecting individual spending, rose by only 0.3 percent, well below the 3.5 percent rate in the previous quarter.

My conservative friend in Milwaukee bragged over a month ago about the incredible job numbers in January and February, numbers actually created under President Obama, that foreign, inexperienced racist black guy. Well the numbers in March were quietly received.. 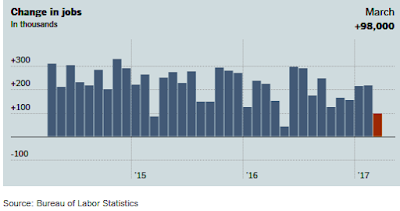 Looking for a Trump bump in the economy? Keep waiting. After two months of stellar job creation that convinced administration officials that President Trump’s policies were paying off immediately, employers pulled back sharply on hiring in March.

1. The economy added 98,000 jobs, the Labor Department reported Friday, fewer than half the monthly number for January and February.

2. The disappointing number of new jobs was jarring for the administration...