The “penny wise pound foolish” party of Republican plunderers are targeting their voting base in rural Wisconsin for another economic punch to the belly.

A broad and diverse coalition of advocacy groups signed on to a letter that was circulated today voicing support for the Farm to School Program, which faces elimination in the pending 2017-2019 State Budget.

Here's what a small $66,400 investment in the Farm to School program brings back to local farmers and their surrounding communities, keeping $1.4 million dollars in the state:

1. The Farm to School program spurs over $9 million dollars in purchases of locally grown and processed foods by Wisconsin schools each year, impacting 500,000 students.

2. The modest expenditure of a $66,400 salary for the position for the Program Director … (is) a meaningful investment in the future of the state’s farmers and students.

3. The Farm to School Program Director has been instrumental in awards of over $200,000 of federal grant funds to conduct training and develop Wisconsin supply chains that encourage procurement of Wisconsin-grown foods including potatoes, yogurt and applesauce.

4. Since its inception in 2009, the initiative has grown to over 390 programs across the state integral in the selection of Wisconsin to participate in a successful USDA Pilot Project.

5. "That allowed Wisconsin schools to divert $1.4 million dollars of their USDA commodity food budgets toward the purchase of Wisconsin-grown fresh fruits, vegetables and other products," the groups noted in the memo. "Wisconsin was one of only eight states selected to participate in this project.

I'm wonder how long it will take the following list of groups to catch on to the fact Republicans aren't their friends. Note: Why in the hell aren't Democrats shouting about this and making their casse to win over rural voters? 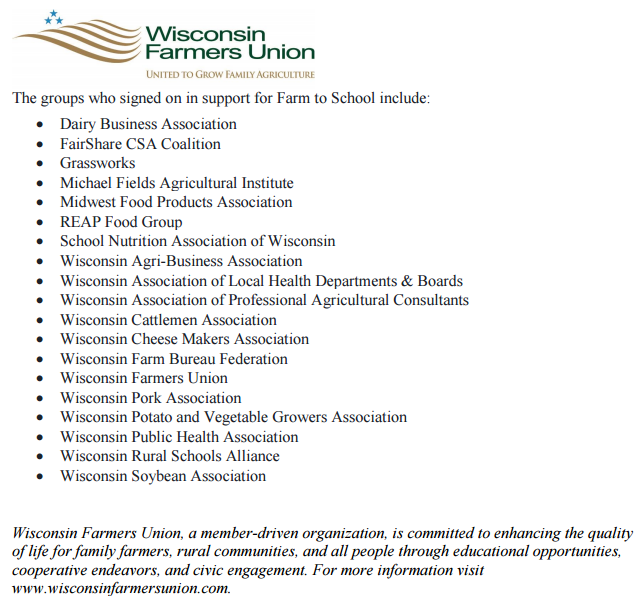