After announcing the sale of our private internet surfing habits, the Federal Communications Commission chairman Ajit Pai announced the end of Net Neutrality a few days ago:

Pai, a former counsel for Verizon (VZ, Tech30), has slammed the FCC's earlier approach to net neutrality as a "mistake" and begun chipping away at the edges of it.

The FCC's action coincides with the following attempt to violate the First Amendment.

It looks like "freedom and liberty" loving Republicans have jumped on board the following plan for censorship. You can't make this stuff up:


More than a dozen state legislatures are considering a bill called the “Human Trafficking Prevention Act,” which has nothing to do with human trafficking and all to do with one man’s crusade against pornography at the expense of free speech.


More of the bills horrific details in a moment. First, who's the crusading man behind this hot idea? 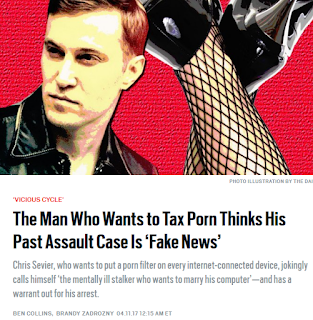 Perhaps more shocking is the bill’s provenance. According to the Daily Beast the man behind the model legislation the state bills are based on is a disbarred attorney who has sued major tech companies, blaming them for his pornography addiction, and sued states for the right to marry his laptop.

No problem there? And yet not one red flag went off for our freedom/small government loving Republicans. You won't believe what passes for good ideas on the right. According to the Electronic Frontier Foundation:

The bills would require device manufacturers to pre-install “obscenity” filters on devices like cell phones, tablets, and computers. Consumers would be forced to pony up $20 per device in order to surf the Internet without state censorship. The legislation is not only technologically unworkable, it violates the First Amendment and significantly burdens consumers and businesses.

Here are the states that have jump on board...don't worry Wisconsin, you'll probably be on it soon...

Just another Republican "small government" maze of regulatory hoops to jump through. And our anti-privacy Republican overlords will be keeping records on everyone:

Anyone who wants to unlock the filters on their devices would have to put their request in writing. Then they’d be required to show ID, be subjected to a “written warning regarding the potential dangers” of removing the obscenity filter, and then would have to sign a form acknowledging they were shown that warning. That means stores would be maintaining private records on everyone who wanted their “Human Trafficking” filters removed.

The bill would force the companies we rely upon to ensure open access to the Internet to create a massive censorship apparatus that is easily abused.

Under the bill, tech companies would be required to operate call centers or online reporting centers to monitor complaints that a particular site isn’t included in the filter or complaints that a site isn’t being properly filtered. Not only that, but the bill specifically says they must “ensure that all child pornography and revenge pornography is inaccessible on the product” putting immense pressure on companies to aggressively and preemptively block websites to avoid legal liability out of fear of just one illegal or forbidden image making it past their filters. Social media sites would only be immune if they also create a reporting center and “remain reasonably proactive in removing reported obscene content.”

When EFF went to two Republican lawmakers in South Carolina and told them who came up with the bill. Neither politicians cared, and despite being against taxes, they didn't mind this tax because they're just "making a statement."


State Reps. Bill Chumley and Mike Burns co-sponsored the Human Trafficking Prevention Act in South Carolina. Chumley called human trafficking an issue that he’s “really concerned with,” so he helped introduce the bill along with Burns.

“Yes, he’s working with us on this,” said Chumley of Sevier. “I don’t know anything about [him] so much. It didn’t really matter to me. Burns said he’s “still behind the premise of the bill,” despite hearing about Sevier’s past. The centerpiece of the bill, the $20 fee, is now up for debate. “We do not want more taxes. Period,” he said. “But we are trying to make a statement, and $20 ain’t gonna kill anybody.”