Republicans are really great time wasters, debating how little health care coverage should be allowed before voters turn on them. Reelections matter to them. When the Democrats passed the ACA, they knew what the risks were, and it didn't turn out well for them.

But there is a solution, and it's part of the discussion they don't want to have.

All-Payer: I used to describe all-payer as a national health care plan of mandated coverage and prices. It was a common element of universal or single payer systems worldwide:


Daily Kos: As Vox's Sarah Kliff rightly highlighted, "France, Germany, Japan, the Netherlands, and Switzerland all use some version of all-payer rate setting." Even with hundreds or thousands of private insurance plans, since 1980 all five countries have experienced much slower growth in health care spending than the United States (see chart below). 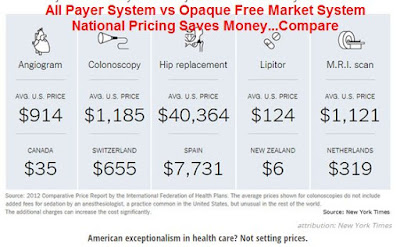 Even without insurance, the lower row of prices wouldn't bankrupt most American families:

In contrast, the Republican vision for health care is a return to the Hobbesian struggle of each against all in the American health care ecosystem. And that means more pain for consumers, insured and uninsured alike. Or as Vox founder Ezra Klein put it in March: “American health care can be free market or cheap. It can’t be both.”

The Four Basic Health Care Systems: This is what we should be debating:


Sick Around the World describes the four basic models including the "out of pocket" approach, the completely government-run system implemented in the UK, the Bismarckian social insurance strategies in Germany and Japan, and the single-payer system in Canada that’s emulated by South Korea and Taiwan:


Reid reports next from Japan, which boasts the second largest economy and the best health statistics in the world. The Japanese go to the doctor three times as often as Americans, have more than twice as many MRI scans, use more drugs, and spend more days in the hospital. Yet Japan spends about half as much on health care per capita as the United States.

One secret to Japan's success? By law, everyone must buy health insurance—either through an employer or a community plan—and, unlike in the U.S., insurers can neither turn down a patient for a pre-existing illness, nor are they allowed to make a profit.

Reid's journey then takes him to Germany, the country that invented the concept of a national health care system. For its 80 million people, Germany offers universal health care, including medical, dental, mental health, homeopathy and spa treatment. Professor Karl Lauterbach, a member of the German parliament, describes it as "a system where the rich pay for the poor and where the ill are covered by the healthy." As they do in Japan, medical providers must charge standard prices. This keeps costs down, but it also means physicians in Germany earn between half and two-thirds as much as their U.S. counterparts.

Republicans are pushing a "buy what you can afford" health care insurance model. The list of physicians below shows you how difficult it would be to make those choices. And don't be naive either, insurers will charge much more for the popular choices, since they aren't about to lose money on cheap stripped down policies. And how cheap can prices go to maintain the yearly incomes below? Annual Physician Compensation Report: 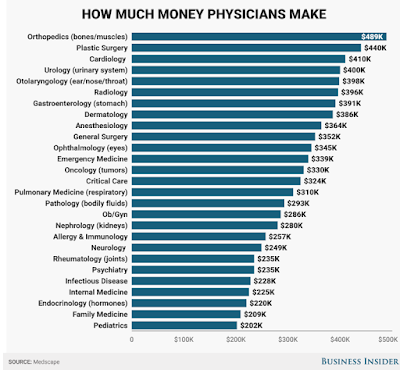