While hospitals and doctors focus on treating the sick, Republicans are focusing in on the real problem; cutting the cost to government all the while enriching the bottom line of insurance companies. Could it be the GOP believes doctors and hospitals work for insurers? Not only has the public changed their minds, but they really don't like the Trump/Ryan/MacArthur plan: 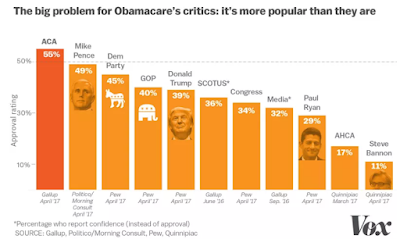 What is more surprising is GOP/Freedom Caucus' appreciation for the dysfunctional way things were, before the ACA, when fewer American got health care, prices skyrocketed and taxpayers paid for the sick in high risk pools.

The latest version of Obamacare repeal and replace would leave it up to the states on how much insurers can charge older customers beginning next year. In 2020, it would allow states to apply for a waiver to change the 10 essential health benefits now required to be part of nearly all health insurance plans. How dramatically will they allow companies to scale back coverage? How many consumers would be pushed out of the market, because the cost of riders for certain benefits are beyond their reach?

University of Chicago professor Harold Pollack said: "If you do away with the essential health benefit, you are opening the door to insurers doing overt and covert ways of trying to avoid covering unprofitable consumers.


"Even though the amendment leaves in place the law's ban on pre-existing condition exclusions, that could effectively accomplish the same thing, by leaving out benefits like chemotherapy or care for HIV. So someone who did have problems like that would be forced to buy a plan—if they could find one—that was priced much higher."

This MSNBC interview asked all the right questions to Republican Rep. Mo Brooks, who ended up voting for the plan. He said he had sympathy for a hypothetical devastated families stuck in a state with an ACA exemption...(below I've included the important parts of the conversation only):


Rep. Mo Brooks: "...BUT at the same time, (if) you went with what I want, and that is a states rights approach, that families state could decide what their citizens can afford by way of pre-existing conditions."

Host: "Is the choice the family has is basically to move out of the state, is that what you're saying?"

Rep. Mo Brooks: "No that is not what I'm saying...I'm one of those that does not believe that Washington elected officials and politicians and bureaucrats are smart enough to be able to dictate all this to the entire United States...that's why I believe we should be deferring as much of this issue as possible to the individual state, let them decide what best fits their needs..."

Host: "Ultimately though that IS a politician in that state who will be deciding the fate... that's still the same thing is it not?"

Rep. Mo Brooks: "Well I have much more faith and confidence in the ability of a local elected officials..."

Right, that "local" statewide know-it-all Republican official and their one-size-fits-all statewide plan is much better. Sadly, Republicans aren't in tune with their constituents, they're slaves to their ideological beliefs:


Republicans are even Forcing Insurers to Go Back in Time: Heck, not even the insurance industry wants to go back to something that failed miserably. This will force the collapse of the ACA, AND the entire individual market, which is a new wrinkle:


Health insurers, many of which have withdrawn from the exchanges, have said they don't want the country to return to a pre-ACA status quo. Blue Cross and Blue Shield of Illinois officials said yesterday that proposed changes being discussed in Congress could force the insurer to rethink its continued role on the insurance exchange and how it prices premiums.

Chris Jacobs, a conservative policy analyst, noted Wednesday that no Republican governors have expressed interest in applying for the waivers envisioned in the AHCA.

And High Risk Pool Lunacy? Republicans are trying to sell you the same broken long expired experiment no one but them wants to return to:

University of Chicago professor Harold Pollack said when states had high-risk pools, those patients cost $7,000 to $10,000 a year more than a typical customer. Providing adequate funding to help insurers make up the costs doesn't improve the federal budget picture. And that was when those high-risk pools contained lifetime limits.

But a study from Milliman suggests ...  If all consumers share in the cost of maternity coverage, it costs $8 to $14 per person, per month. Being forced to buy a rider during childbearing years could cost 25% to 70% more each month than other customers the same age.

I'm not sure what where Republican received their medical training, but their expertise in health care knows no bounds. In another way to look at what the Freedom Caucus' Tea Party ghouls have done, despite warning from the entire medical community...:

A coalition of six physicians' groups (listed below) sent a letter to Congress critical of the latest version of the American Health Care Act, which would give states the option of scaling back Essential Health Benefits such as mental health coverage. "We believe that pending legislation proposals would dramatically increase costs for older individuals, result in millions of people losing their healthcare coverage, and return to a system that allows for discrimination against people with pre-existing conditions," the letter said.

That would be called a bad outcome. The revised bill is intentionally deceptive:


Although the draft language says the bill does not allow for discrimination based on pre-existing conditions, if insurers were allowed to charge more for policies that include chemotherapy infusion drugs, or inpatient behavioral health treatment, that could price people out of the market who need those services.