Republicans and like minded voters just don't protest. It's a liberal thing, and they hate it.

The last time I saw conservative protesters was in 2011, when a group of seniors were bused in from areas around the state by Americans for Prosperity. No really, that happened.

Scott Walker's union busting agenda included regulations curtailing free speech and protesting. Just so you know, that didn't work out for him in the courts: 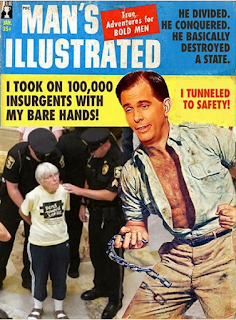 The Department of Administration (DOA) and Capitol Police havebeen ordered to arrest and cite protesters whose only offense is the silent carrying of a sign ... protesters have been cited for gathering for the "Solidarity Sing-along," a non-violent group of citizens who sing every day over the noon hour.

Senate Majority Leader Scott Fitzgerald’s office sent a note to legislative offices warning staff not to congregate along the balcony during the protests. “If you are in the vicinity of the illegal demonstrations that have been taking place over the noon hour in the rotunda, you will be considered part of the protests and are subject to being ticketed,” the message said.

Capitol Police Chief Dave Erwin is installing panic buttons in some lawmakers' offices, changing the look of his officers' uniforms (banning facial hair) and raising some eyebrows with a suggestion to female legislative aides that they be prepared to hit demonstrators if they feel threatened and cornered. “There's a time and a place. But every day, every day, you've got to think about that," Erwin said.

The new DOA policy allows fees to be imposed on the indigent as a condition of protesting, it vests unbounded discretion in the Capitol police to determine whether to impose advance fees for security costs, and it requires permits from small groups of four or more protesters. Capitol Police were enforcing a rule in the state administrative code that required a permit to hold a sign on state property.

Nass said, "If they were arrested vigorously, I believe that would slow them [protesters]."

Gov. Scott Walker's administration could hold demonstrators liable for costs for extra police presence or cleanup and repairs following protests at the Capitol.

Trump takes it to the Next Level: And now we have the latest attempt to make even the original tea party participants felons:

"It's crazy, a few windows got smashed," 23-year-old Olivia Alsip said, two months after her arrest on felony riot charges. "Why are 214 people looking at ten years in prison?"

Alsip only knew one other person at the protest march that day. The political science graduate student from the University of Chicago had met her partner in November, when the two had joined the camps at Standing Rock opposing the Dakota Access Pipeline. When they heard about calls to protest Donald J. Trump's inauguration in D.C. on January 20th under the banner "Disrupt J20," they felt they had to be there. "I identify as an anarchist, and I've been an activist for women's and queer rights since the 8th grade," Alsip told me over the phone from Chicago.

Alsip is among 214 defendants facing felony riot charges, up to a decade in prison and a $25,000 fine for their participation in the anti-capitalist, anti-fascist march, which ended with a mass arrest on the morning of Inauguration Day.

Alsip didn't break or throw anything. Now she lives in shock over the steep price she and her fellow protesters might pay as the new administration and police forces set the tone for how they will deal with the spike in organized dissent ... narchists and anti-fascist activists across the country have responded to Trump's ascendancy, and particularly the attendant emboldening of white supremacists, with confrontational protest.

Veteran D.C. attorney Mark Goldstone, of the charges. Goldstone, who has defended dozens of activist cases and is representing six of the J20 defendants, called the charges "unprecedented territory." The government has already proven its willingness to set what Goldstone called "a monstrous trap" for protesters, by leveraging high risk trials against paper-thin cases.

"It definitely hits in waves," Alsip told me. "I'm nervous. I try to think that even if I do go to prison, I would remain committed, and politically active. But," she paused, "I just can't believe that my thoughts have to go there. And that we're all facing this." Another pause. "A few broken windows."