Some have criticized Coulter's own approach to the issue: she demanded that the university expel any student who engages "in violence, mayhem or heckling to prevent an invited speaker from speaking."

Ann Coulter's Law introduced by Republican Rep. Robin Vos: Oddly similar, you have to wonder how Republicans do this, making what is normal and a founding principle of our Constitution into something repellent and repressive:


Assembly Speaker Robin Vos, R- Rochester, and Rep. Jesse Kremer, R-Kewaskum, proposed legislation (that) would set new rules for free speech and expression on University of Wisconsin System campuses. That includes penalties for people who disrupt free expression on campus by engaging in "violent, abusive, indecent, profane, boisterous, obscene, unreasonably loud or other disorderly conduct" … Students could be expelled under a bill.

The broad categories and up for interpretation expressions listed above wouldn't just chill free speech, it would discourage it under threat of punishment. Vos' fascist idea may play well for Ann Coulter and David Horowitz, who want to energize and play the political victim, but a government official
pushing...this is jaw dropping.


"The worst part of it is this incredible litany of categories, most of which, as I say, are clearly unconstitutionally vague or imprecise or undefined," said Robert O'Neil, professor emeritus of law at the University of Virginia, where he specialized in the First Amendment law. O’Neil is also a former University of Wisconsin System president.

A Tangle of Big Government & Big Brother Bureaucracy: Like voting, getting food stamps, receiving unemployment, and applying for BadgerCare, Vos and Kremer have created a maze of hearings, a "jackpot justice" system of costly lawsuits, and disciplinary procedures to endlessly navigate:

Speakers who feel their free speech rights were violated at a UW campus could sue the institution for damages under the bill. And the legislation would create a council of UW officials that would report to lawmakers on the outcomes of discipline proceedings.

It's hard to imagine how Vos and Kremer never seemed to get the First Amendment thing, that this didn't raise any red flags. It did for readers: 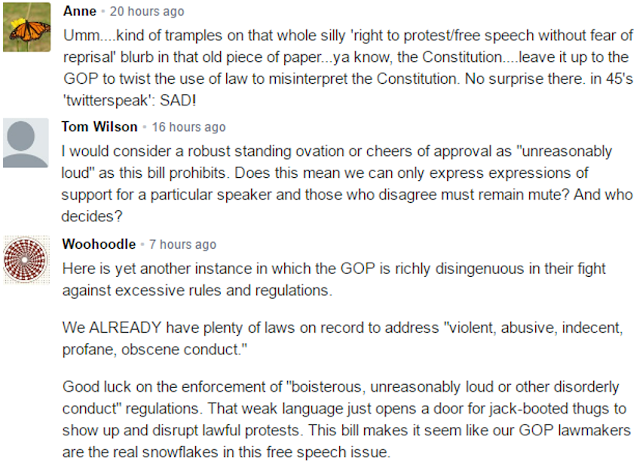