It wasn't so long ago, Republicans were trashing "Emperor" Obama for writing executive orders. Well...remember....?

Republicans skewered President Obama as an "emperor" who acted outside of his "legal authority" for the executive orders he issued from the Oval Office. Now, they are cheering President Donald Trump as he issues a raft of his own.

Rep. Tom Cole, R-Okla., criticized Obama for "temper tantrum-like behavior" Rep. Jason Chaffetz, R-Utah, said "It is behavior that undermines, and will ultimately erode, the foundation of our democracy and our freedom." Sen. Jeff Sessions called Obama "emperor" for his use of executive action on immigration.

Paul Ryan condemned Obama's executive orders, calling a handful aimed at reducing gun violence "a dangerous level of executive overreach." In a press conference, Ryan argued that Trump's executive orders were different — because he agreed with the actions. "It's quite the opposite. President Obama used his pen and phone to exceed his powers in our perspective.

Trump's Failed 100 Days:  So far, it's not looking too good for Trump, but why should it, he's riffing his way through the presidency. Trump has  66 executive actions so far:

As of April 19 Trump had issued 24 executive orders, 22 presidential memorandums and 20 proclamations, none of Trump’s bills can be considered “major” legislation according to political science standards.

Let's compare administrations, Trump vs Obama: GOP values rise to the top in Trump's amazing list of accomplishments below:

2. Make it easier to shoot sleeping bears in their dens or from helicopters;

Check out the graph below: 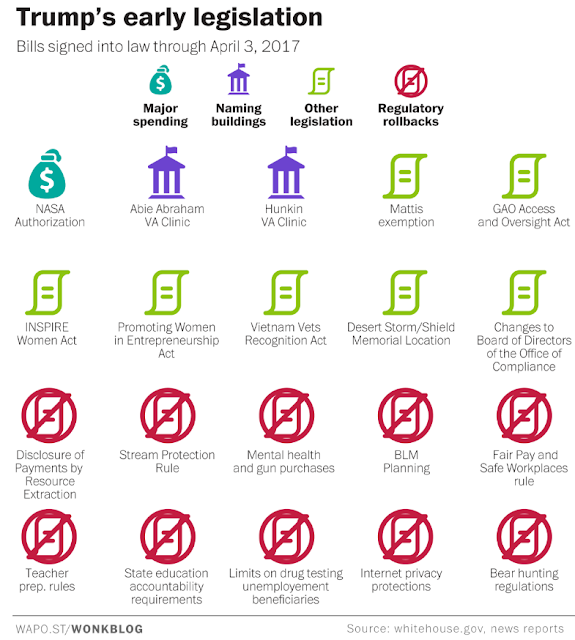