...thought the Janesville anti-government fugitive was after him? 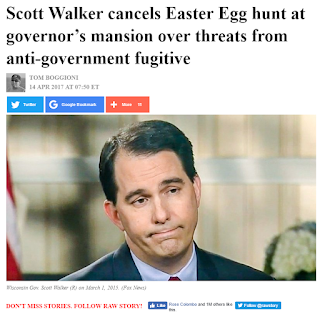 Wow, egomaniacal much? Coward and anti-Easter bunny blowhard Walker just let a whole bunch of kids and their families down, by overreacting in the most paranoid way possible, because it was all about him:

Jakubowski's arrest came about 6 a.m. Friday, when tactical officers surrounded his campsite in a field near Readstown and arrested him without incident.

The Easter egg hunt is back on, Sat. at 11 am, like anyone wants to hang out at the governors mansion with this "terror" opportunist.

Right wingers have had a field day trying to turn Jakuboski into a liberal, because nothing says liberal like robbing gun stores and spouting anti-government rhetoric.

Jakubowski claims the government was trying to brainwash its citizens through taxes, religion and health insurance … a long list of grievances against the government and law enforcement.

There is little indication of schools … Jakubowski "Has concerns with Trump," but his manifesto doesn't mention a specific threat. "We the people should be out for these sick minded people belonging to the system! We need to spill their blood!"