Trump will be blamed for ACA collapse!!!

Overwhelming majorities in both party's support making changes to the existing Affordable Care Act. And yet Trump is now saying he wants changes that would directing break many of his campaign promises to lower prices and offer better care, just so he could supposedly save $900 million and throw 24 million people off insurance:


Trump: "I think we're doing very well on healthcare. It's been very much misreported that we failed with healthcare. We haven't failed — we're negotiating and we continue to negotiate and we will save perhaps $900 billion."

Trump is referring to the CBO report on the AHCA ... estimated that the bill could cut the federal spending by $880 billion over the next 10 years ... (but) After the most recent additions to the AHCA, the CBO updated this estimate to say the deficit could shrink by only $151 billion.

And while Paul Ryan continues to try and reinvent the health care wheel, ignoring other successful systems worldwide while bringing back those failed "high risk pools," the market based solution he so badly wants is right there in front of him; the all-payer nationalized plan, where countries with insurers negotiate one price for each procedure. That in turn, eliminates the massive and costly price differences between providers, saving everyone lots of money.

Alaska Plan: If we had an "all-payer" pricing policy, and did what Alaska did with "reinsurance" (not risk pools), we could stabilize premiums for years to come:


Premiums for individual health insurance plans were set to rise 42 percent. So the state tried something new and different — and it worked. Lori Wing-Heier, Alaska’s insurance commissioner, put together a plan that had the state pay back insurers for especially high medical claims submitted to Obamacare plans. This lowered premiums for everyone. In the end, the premium increase was a mere 7 percent. The state already had a tax on insurance plans (not just health but also life and property insurance) ... used that money.
Now other states are interested in trying Alaska’s idea, especially because Wing-Heier is working with the Trump administration to have the federal government, not the state, cover those costs.

It's the old reinsurance model, paired with low predetermined prices for care.


Reinsurance essentially backstops insurers’ losses; it guarantees they won't be on the hook for the bills of a handful of exceptionally sick patients.

But Republicans have never worked hard on solutions that require research, knowledge and debate. It's much easier to repeal something, and then promise to "look into" or "study" the issue at another time.

Now Trump wants to blackmail Democrats into negotiating with him and Paul Ryan.

Trump’s new threat is that he will cut off so-called cost-sharing reductions, which subsidize insurance that offers lower out-of-pocket costs to 7 million lower-income Americans. For all the details, see this piece by Jonathan Cohn; if Trump does this, premiums could skyrocket and insurers could flee the individual markets, causing them to melt down and ultimately pushing millions off coverage. As Cohn notes, Trump is basically “threatening to torpedo insurance for millions of Americans unless Democrats agree to negotiate with him.”

Will Trump kill the ACA?

Trump told the Journal that “Obamacare is dead next month if it doesn’t get that money,” adding that “Democrats will start calling me and negotiating.” Trump treats the word “deal” as some kind of magically irresistible end in itself. But under these circumstances, the only known endpoint — the supposed “deal” — is worse than the “threat.” Why should Dems feel any incentive to respond to such a threat? 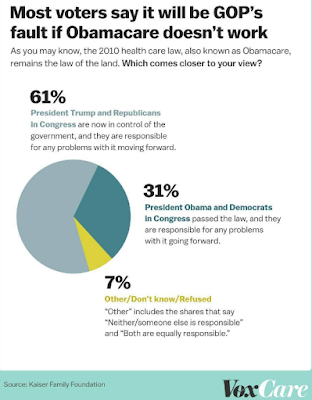 President Trump threatened to leave the law alone and let it self-destruct. But the April Kaiser Family Foundation survey finds that 75 percent of the public wants the president and the Republicans to do what they can to make the law work, compared to only 19 percent who think they should let the law fail so they can replace it later. Moreover, 61 percent say that the president and the Republicans are now in charge and are responsible for problems with the ACA—not President Obama and the Democrats who enacted it.