WISN News Director Herrera: "I will never...set foot in Dane County...liberal bastion...avoid giving money to the libs who have businesses there."

With never an original thought in their Borg-like heads, the Republican talk radio machine now wants to copy the growing business boycott of bigoted North Caroline, by boycotting Dane County.

After right-to-work was struck down by an enemy of the state, a “liberal” judge, WISN Radio's news director Ken Herrera hatched the idea. Of course it goes without saying that conservative judges are almost always right. And if their not, they're purged from the system (see Kansas Supreme Court).

What's most appalling is that a radio station’s NEWS DIRECTOR is pushing this by making it public. Which begs the question; what else is Herrera choosing to spin, ignore or censor in the station’s coverage of news?

Outdoing his own authoritarian right wing talk show bloviators, Herrera just opened a whole new can of worms; are the talkers just a distraction from the more silent subversive nationwide movement toward an extensive network that's dedicated to right wing propaganda…via our public airwaves?

It’s interesting to note the hypocrisy; Republicans have always opposed boycotts, going so far as to protect campaign donor names and employee contributors to ward off a possible public backlash effecting their businesses bottom line. Another “principled” flip flop?

Personally, it's hard to imagine a more outlandish statement coming from someone the public assumes is unbiased and fair. Nice catch by the Devil’s Advocates, who wrote:

Dom: "I wonder if his opinions on 'libs' and Dane County impact decisions on what 'news and information' he is employed to direct."


Ken Herrera: "No surprise here...it's a Dane county judge...I am happy to say that in the 12 years I have lived in Wisconsin...I have never...and will never, set foot in Dane county. I don't want to spend even one penny in that liberal bastion. It's sort of a personal thing…but my wife and I agree we will never enter Dane county as long as we live. We have actually taken routes WAY around the county to avoid giving money to the libs who have businesses there...this has been my personal boycott for as long as I've lived in WIsconsin...and I'm quite sure I will never, ever spend a penny in Dane county...because I will never, ever visit... I wish every conservative in the state would adopt the same pledge... avoid this county... when you spend money there you are only helping the liberal cause..."

Herrera went on to highlight his stations influence on public perception, especially when it came to the raw pro-Ted Cruz propaganda, like it was a bragging point: 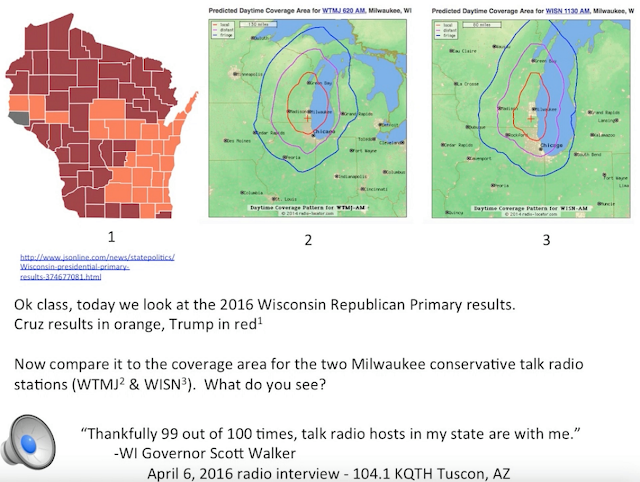 Herrera's Facebook supporters like Andy Smith are proving the slide into right wing authoritarianism is on the fast track:


Andy Smith Slap! Frap! Zowie! Oooof! Bam! GOOD JOB, KEN. I listened to you on WBBM, I had the pleasure and honor of working with you at both WTMJ and then-Clear Channel. You label what's news and what's comment . . . they merely resent that everyone doesn't listen to CLEARLY Left Wing "public" (translate: government radio), which NEVER distinguishes "news" from Leftist agenda setting and active Leftist agenda advancement.

After that twisted rant, the liberal enemies of the state reacted with humor and criticism: 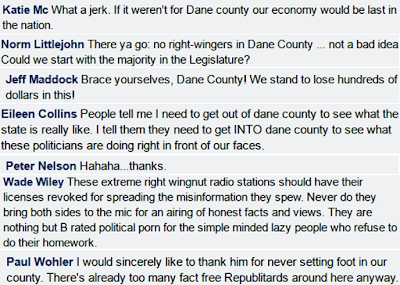 Andy Smith's response made it clear humor, speech and dissent will not tolerated, in another bad case of projection:

“Amazing (well, actually not a surprise) to read the red-hot hatred firing from the typing fingers of all those, tolerant, accepting, kind, thoughtful Leftists in Dane County who CANNOT STAND anyone whose attitudes, opinions and behavior are not in LOCK STEP with their own. It's disgraceful, but as we've learned in so many ways, it is also predictable and consistent. So filled with vile hatred!”

UPDATE: WISN News Director Ken Herrera is now officially a victim, thanks to his own right wing commentary. Herrera's attempted to save his credibility ranks right up there with "former" bigot and political partisan Justice Rebecca Bradley, insisting his personal beliefs don't influence his job:


Ken Herrera No... it's a personal boycott...to answer your question about whether my personal beliefs interfere with my news judgment.. The left is always holding boycotts that are highly publicized.. mine has been, until now, a quiet, personal one that has nothing to do with my selection of news stories to run...or the "slant" of any story. I think any listener to WISN will know I run stories that are pro-left.. and anti-left just as much as those that are pro-right or anti-right. I just personally don't agree with much of what the left holds out, so I choose, as an individual, not to contribute my money to the left. That's just a personal decision and has nothing to do with my profession... one I have followed for almost 40 years now and I believe you won't find anyone in the country who would question my ethics as a journalist. Except, of course, you... based on a simple Facebook post. But I'm not surprised because that's usually the way folks on the left operate...