NPR's On Point host Tom Ashbrook took an interesting look at what Donald Trump's America would look like, according to a recent Boston Globe editorial that used Trump's own words.

Personally, this should be done more often in the media, as a service to those who are easily blinded by their ideology. Yes, for Democratic and Republican candidates. The fact that this creative satire was roundly criticized by conservatives everywhere as deceptive and misleading, despite using Trump's own words and ideas, pretty much says it all: 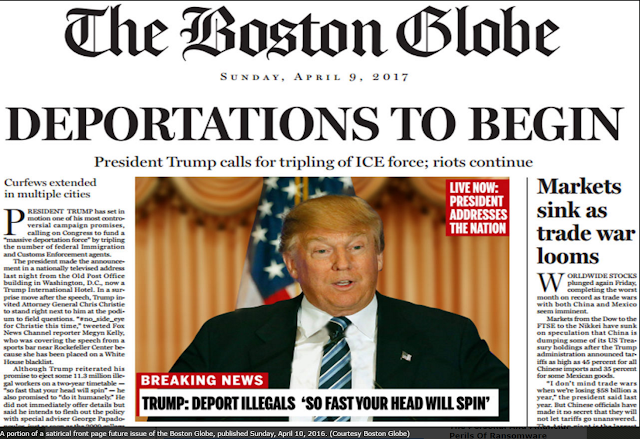 It is not April 10, 2017, and the U.S. presidential election is still well in play. But that didn’t stop the Ideas section of the Boston Globe from imagining a future under President Donald Trump. Their scathing editorial and satirical front page mock up drew many eyes this weekend ...

Kathleen Kingsbury, the deputy managing editor of the Boston Globe editorial page and editor of the paper’s Ideas Section, joined us ... “We did this an exercise in taking Donald Trump at his word,” Kingsbury said. “Frankly, his vision of America promises to be as appalling in real life as it does in black and white on the page. This is one way we are doing our jobs — we are commenting on the news through opinion to get people talking about what the future of America looks like with Donald Trump in the White House,” Kingsbury said.

Among the imagined future headlines? Mass deportations and broad public riots, a global trade war and even an Ambassador Kid Rock.