Thanks to Wisconsin's primary action, the national media is picking up on, and featuring, the mess Scott Walker has made of our elections process. For his rabid fans, jumping through hoops, unreasonable exemptions to the list of acceptable forms of ID, and inconvenient times to vote are okay as long as Republicans can say "we win" on election day. They do know suppression experts aren't done yet, right, and that they're next?

All In host Chris Hayes dissected Scott Walker’s claim voting is not just easier in Wisconsin, but it's also much harder to cheat at.

Walker: "We make it easy to vote, you can vote, same day voter registration, you just have got to have that voter ID along with, but we also make it hard to cheap and that's the difference. He should look at the facts."

The facts??? Since when did they matter? The Nation's Ari Berman explains:


Voter impersonation is virtually nonexistent in Wisconsin. “The defendants could not point to a single instance of known voter impersonation occurring in Wisconsin at any time in the recent past,” wrote Judge Lynn Adelman of the US District Court in Wisconsin. “It is absolutely clear that Act 23 will prevent more legitimate votes from being cast than fraudulent votes.” (Adelman was reversed by the US Court of Appeals for the Seventh Circuit, who ruled that Wisconsin’s law was “materially identical” to the Indiana voter-ID law approved by the Supreme Court in 2008, even though Wisconsin’s bill is significantly stricter and impacts many more voters. See Judge Richard Posner’s dissent for more detail.) 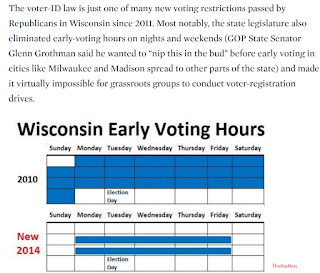 There's no logical explanation why voting times needed to be reduced either. Rep. Dewey Stroebel insisted small communities couldn't afford longer early voting times, so big cities had to lose theirs. Now high population areas have to squeeze everyone into the polling places within the limits imposed by small rural towns. I know, dumb right? The fact that they played stupid on that issue and got away with it still pisses me off.

Another inconvenient fact: It hurts Democrats! That spewed out of the mouth of conservative wacko Phyllis Schlafly:


In a column for right-wing clearinghouse WorldNetDaily, Schlafly acknowledged as much with a defense of North Carolina’s new voting law:


“The reduction in the number of days allowed for early voting is particularly important because early voting plays a major role in Obama’s ground game. The Democrats carried most states that allow many days of early voting, and Obama’s national field director admitted, shortly before last year’s election, that ‘early voting is giving us a solid lead in the battleground states that will decide this election ... so early voting is an essential component of the Democrats’ get-out-the-vote campaign.” She later adds that early voting “violates the spirit of the Constitution” and facilitates “illegal votes” that “cancel out the votes of honest Americans.”

It doesn't make sense but does sound scary.

But the obvious targeting of student voters and DMV generated voter ID's makes it clear they want to suppress voting. I predict someday, if Republicans stay in power long enough, voting will lose its relevance and be more trouble than its worth:


Student IDs from most public and private universities and colleges are not accepted because they don’t contain signatures or a two-year expiration date (compared to a ten-year expiration for driver’s licenses). “The standard student ID at only three of the University of Wisconsin’s 13 four-year schools and at seven of the state’s 23 private colleges can be used as a voter photo ID,” according to Common Cause Wisconsin. That means many schools, including the University of Wisconsin-Madison, are issuing separate IDs for students to vote, an expensive and time-consuming process for students and administrators. Students who use the new IDs will also have to bring proof of enrollment from their schools, an extra burden of proof that only applies to younger voters.

Right now, the dirty little open secret of Wisconsin is that just 31 of our 92 DMVs maintain normal Monday through Friday business hours. Forty-nine of them operate only two days a week. One, in Sauk City, is open for just a few days a year. Only two are open at 5 p.m., and just three are open on weekends. For the whole state.