Long before Scott Walker destroyed and basically dismantled the DNR, he went out and hired a game farm advocate to break Wisconsin away from our traditional deer management practices to hunter driven policy based on demand and pet peeves.

This can be a serious problem when you're trying to control the spread of chronic wasting disease. Anyone want to eat venison contaminated with it?

I've been blogging about this for some time (search CWD in the upper left corner). We're now faced with a nearly out-of-control problem.WPR:


More Wisconsin deer are testing positive for chronic wasting disease ... more than 9 percent, according to state figures. But the number of deer being tested is down from years past ... 3,138 deer, down from 5,465 in 2014. The situation has some lawmakers arguing that the governor and DNR should be more active in fighting the problem.

Would you Eat CWD infected Deer? Sure, why not...

A team of researchers from universities in the United States and France say they’ve found new evidence that it’s possible for humans to contract the agents that cause CWD. They injected mice, whose DNA had been modified to resemble humans, with mutated proteins called prions. Testing showed two out of 20 mice tested positive for prion infection.

But former Wisconsin Natural Resources Board Member Dave Clausen advised the results are not cause for alarm. "This study does not mean that human infection is a foregone conclusion," Clausen said. "All it does is demonstrate that it is possible."

That's all it does. Feel better?

Democratic criticism Politics, or actual Criticism? And while Democrats want to deal with this and other problems, they're not being taken seriously, because well they're...the "left." Scott Walker said as much, when he lied about the states commitment, and redefined the Democrats honest fact based criticism as gotcha politics:

Walker said science will drive future deer management decisions – not politics. Walker said the state is committed to a healthy deer herd: "We’re ready and willing to hear their recommendations. They made a call to be more aggressive, but they didn’t give us specifics. If they’ve got specific ideas, we’d be more than happy to work with them or anybody else."

No specifics? Oh god where do we start unpacking that load of BS? First let's see what Walker has done "specifically," besides propose leaving road kill to rot on the side our state highways:

1. The DNR has half the CWD testing budget it had last year.

2. Last year the DNR stopped using the term “CWD management zone” … “In the absence of having any management strategies or tools to deal with it, it is basically an endemic area … endemic means: It’s here to stay.”

3. George Meyer, a former DNR secretary said, “It is going to spread further and further out and eventually ... biologists in the department ... are not allowed to talk about it and not allowed to bring forth proactive measures to deal with it.”

4. The agency will solicit samples at only two locations in southern Wisconsin ... down from between 15 and 20 locations in recent years.

5. Janesville Gazette Xtra: Wisconsin deer farmers can opt out of the state's chronic wasting disease monitoring program without upgrading their fences under an emergency rule the state DNR adopted Wednesday despite concerns the move could spread the disease ... spare deer farmers extra expenses. The DNR recorded 29 escapes this year (2015) alone ... "The DNR fencing requirement is the last safeguard to prevent further CWD contamination of the wild deer herd," Meyer said.

6. Walker says Gov. Jim Doyle and the DNR have engaged in "political games" and "put bureaucrats in Madison ahead of hunters of the state."

8. AP: A state board voted to limit a new law ... The Sporting Heritage Bill ... expanding hunting rights in state parks ... after Wisconsin residents said they wouldn't feel safe ... DNR Secretary Cathy Stepp said the board should remember that lawmakers passed the law with the intent that hunting be expanded. “Ours is not to debate what the elected officials decided,” she said.

As for the Democrats offering specific ways to deal with CWD? Well, other state's are doing just the opposite of Scott Walker: 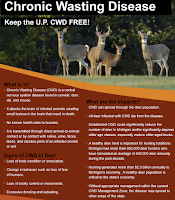 2. In Illinois, where officials continued to reduce the herd in diseased areas, there has been no increase, University of Illinois researchers found in a 2014 study. The prevalence of the disease is much lower in northern Illinois, where targeted sharpshooting has been used by Illinois wildlife officials since 2002. The prevalence rate is under 1% in Illinois' 12-county CWD area. In 2007, the DNR defended the use of sharpshooters as an "efficient and effective tool in reducing deer numbers and removing diseased deer," because the shooters were killing more antlerless deer than hunters were.