Republicans don't like to make anything easy. Imagine how much extra time we'd all have if we didn't have to shop for health insurance every year. I'm also convinced Republicans want to make voting so hard or inconvenient that people will eventually just lose interest.

As the title suggests, there's a possible change coming to the voting process, and this time as Martha Stewart would say, "it's a good thing." I can't wait to see what Scott Walker and the Republican legislature will do next, since this puts them in a tough spot. If they don't go along with it right away...it just confirms what Rep. Glenn Grothman said was true. JS:


Wisconsin and other states have adopted voter ID laws more stringent than Indiana's. For instance, Indiana's law allows people who can't get IDs to sign affidavits at the polls instead of showing IDs. Wisconsin has no such provision — a point the appeals judges noted Tuesday.

"Indeed, one may understand plaintiffs as seeking for Wisconsin the sort of safety net that Indiana has had from the outset. Under Wisconsin's current law, people who do not have qualifying photo ID ... cannot vote, even if it is impossible for them to get such an ID. Plaintiffs want relief from that prohibition, not from the general application of (the voter ID law) to the millions of persons who have or readily can get qualifying photo ID. The right to vote is personal and is not defeated by the fact that 99% of other people can secure the necessary credentials easily."

But the panel of appeals judges on Tuesday ... noted instances where government agencies have lost birth certificates in fires or where people have been told they can't get an ID without a Social Security card and they can't get a Social Security card without an ID. The three judges who issued Tuesday's ruling — Easterbrook, Diane Sykes and Michael Kanne — were all appointed by Republican presidents.

The almost laughable argument yet, came from Walker's AG lapdog Brad Schimel. Only a total incompetent screw-up would offer up this excuse, and I'm paraphrasing; a record number of people, mostly Republicans, turned out voter! So hey, what's the problem?  You can't make this stuff up:


Johnny Koremenos, a spokesman for Attorney General Brad Schimel, emphasized, "Given the overwhelming success of the DOT program, and the fact that our state's recent primary elections involved record turnouts, we are confident that we will prevail on the narrow issues that the court remanded on." Koremenos ... noted voters can get IDs for free from the state Department of Transportation.

Of course that has nothing to do with the problem, but it'll probably sufficiently fill the dead still air between the voters ears who are dying for another order.

Check out the Nation's story on one victim of voter ID: 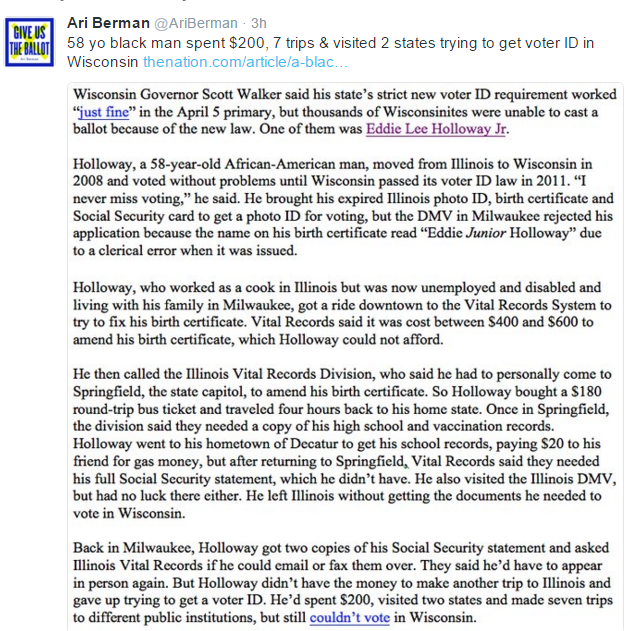