Scott Walker can do no wrong:

1. Scott Walker supporters say it's a lie voter ID was meant to suppress votes, despite a Republican senators chief of staff witnessing such discussions.

3. When it comes to Scott Walker turning the state around with big bold policies, a template he says the nation should follow, Wisconsinites are no longer willing to play the fool...except his drone army. According to the WPR/St. Norbert College Poll, we stink even worse than the Great Recession?: 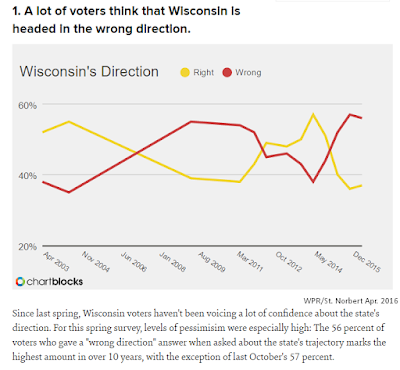 Walker has only his the low unemployment numbers to brag about, but that's because he signed reform that makes it harder to get unemployment benefits.

In one of the most jaw dropping examples of just how bad those changes were, pushed by big business...well, thankfully, the courts stepped in...CapTimes:


Employers can’t deny unemployment benefits to employees fired for inadvertent errors, the 4th District Court of Appeals said Thursday in a ruling that an attorney in the case said could affect “thousands” of workers … follows a challenge to a 2013 law that allows employers to deny unemployment benefits for “substantial fault,” a legal concept that the court said is legally untested.

The case pertains to former full-time Walgreens employee Lela Operton, an elderly woman who made eight “cash handling errors” over the course of 20 months ... Her total number of transactions during this time were estimated to number 80,000. The errors involving the WIC checks included the acceptance of a $6 check for a $6.17 purchase for a 17-cent loss, another check overdraft for $2.89, accepting a check before its valid date, handing a check back to a customer instead of retaining it for deposit, failing to get a customer's signature on a check and inadvertently placing another check in a customer's bag.

And this is Walker’s message to hard working Wisconsinites? No mistake…none:

The state Department of Workforce Development initially denied her unemployment benefits on the grounds of “misconduct.” An administrative law judge later ruled that because Operton never “intentionally or willfully disregarded the employer’s interests by continuing to make cash handling errors,” her dismissal was due to substantial fault. The state Labor and Industry Review Commission upheld the administrative law judge’s ruling, which was also upheld by Dane County Circuit Judge John Albert.

The appellate ruling notes that in the 2013 law, the Legislature enacted ... “’Substantial fault’ a completely new legal concept not previously in existence,” Appellate Judge Paul Reilly wrote in the decision. “LIRC is not applying an old statute in a new way; it is applying a new statute to a new concept" ... discounted Walgreens’ and LIRC’s argument that the cumulative effect of Oberton’s errors “cross over the line” to disqualify her for benefits. “Repeated inadvertent errors do not statutorily morph into ‘infractions’ ... Reilly noted that the law was expected to reduce benefit payments from the unemployment insurance trust fund by $19.2 million, the same amount of the fund’s deficit.

Options include appealing the case to the state Supreme Court.

That's why Wisconsinites woke up: 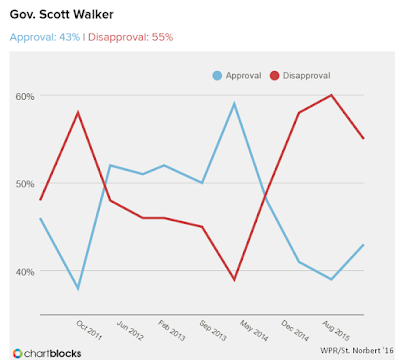