Want to put a face to the pushy Jesus Lunch loons? Meet Melissa Helbach, one of five women who need to feel loved and accepted, and who thinks they could be my kids "mom" too. Does she believe in contraception? Is she part of the "pro-life" movement against abortion but won't lift a finger to make sure everyone has life saving health care? Does she believe Jesus is the answer and not science?

Why is Melissa Helbach motivated to spread the word to minors next to a public school? Why not camp out at one of the many private Christian schools using the public's money to conduct weeklong Sunday schools? What's her message? From the many comments I've read, no one is asking what it is they're talking about, their positions. People seem to think Christians have the same message as Jesus. Forget about the radical Christian right or past Christian messengers like David Koresh, all is well when it comes to influencing minors away from their parents:

Helbach didn't intend to cause a controversy, but hell, with the threat of suing the district, guess she's hit the media jackpot. District administrators sadly played right into their hands. WISC:

One parent in northern Wisconsin had this to say:

Middleton Schools just needs to institute or enforce with threat of expulsion as they do at my town's high school, that students don't leave the grounds during the school day.  For reasons of legal liability and foremost student safety. Access to student autos and parking lot thus controlled for the school day, also.  I guess no booze or pot behind that reasoning also.

No one has mentioned that policy yet on line or WPR.  Our rural high school Gibraltar township Door County, the school doors are locked during the day.  Admittance by office personnel only, immediately into the school office to sign in and get a guest pass.  Staffed until the buses leave the school grounds about 3:20 PM and after school activities commence.

Simple school policy issue not involving property rights or park permits. 1997 we students held a cafeteria boycott for better lunches, outside serving eventually shut down by county sanitarian, but we got real food in school after that.

Here's my own response in the comments section, where oddly no one could grasp the idea we were talking about kids under 18, being manipulated by adults. This is about parents raising their children, and not handing them over to right wing religious fanaticism: 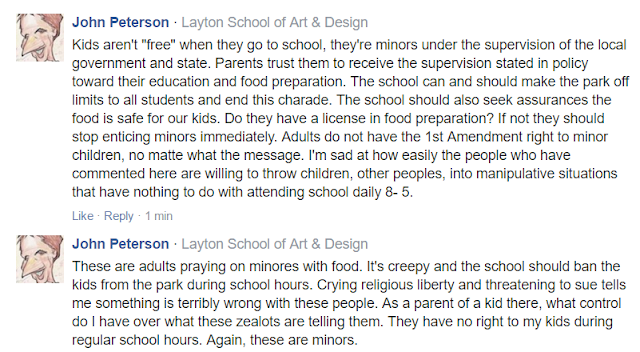