It's pure politics: It looks like business executives don't mind lifting the minimum wage after all. The shocking truth is, everybody's on board with higher wages...except for Scott Walker and his uber partisan legislature.

The real impediment to helping struggling Americans rise out of poverty is the ideologically driven need to punish the "takers;" embarrass them, take their food, suggest they use drugs, all the while forcing them into jobs that don't pay much. 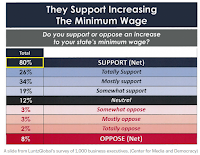 The survey of 1,000 business executives across the country was conducted by LuntzGlobal, the firm run by Republican pollster Frank Luntz, and obtained by a liberal watchdog group called the Center for Media and Democracy. (The slide deck is here, and the full questionnaire is here.) Among the most interesting findings: 80 percent of respondents said they supported raising their state's minimum wage, while only eight percent opposed it. "That’s where it’s undeniable that they support the increase,” Luntz told state chamber executives in a webinar describing the results,


Luntz then provided some tips on how to defuse that support, such as suggesting other poverty-reduction methods like the Earned Income Tax Credit. “Where you might find some comfort if you are opposing it in your state is, 'how big of a priority is it against other priorities?'” he said. "Most folks think there are bigger priorities ... So when you put it up against other issues, you can find other alternatives and other things to focus on. But in isolation, and you ask about the minimum wage, it's definitely a winner.”

Let's look at all the times Walker played off the verbal frame Luntz concocted around the minimum wage, and how well the distraction worked for him:


Scott Walker: "The left claims that they're for American workers and they've just got really lame ideas — things like the minimum wage. Instead of focusing on that, we need to talk about how we get people ... the careers that pay far more than the minimum wage."


Scott Walker: "Said the best way to help people see their wages go up is to get them the education and skills they need..."I just want to address that issue because you said I didn't answer, and I did....The answer is to give people the skills and the education so they make far more than minimum wage."

Scott Walker: “It is a job-killing agenda. It’s done for political expediency. It’s a cheap headline.”

Earned Income Tax Credit Hypocrisy: Walker's Wisconsin did the unthinkable, it raised taxes!!! Yes, Republicans raised taxes on the states poorest. And they did it by cutting the EITC. While Luntz suggested increasing the EITC as a way to distract from the minimum wage, our extreme Governor Walker went the other way with it:

Walker and his base of voters are steadfastly against solving problems that make life better for everyone, because they won, get over it. Sticking it to someone else is also damn easy:

Here's just one story for meat heads like Tom O'C, who probably has a "support the troops" bumper sticker on his car:

Video of an Iraq War veteran's emotional testimony before the Atlanta Wage Board is going viral. The video of the former Marine has garnered nearly one million views on Facebook and more than 23,000 shares.

"I don't want my son to look at me like I'm something less because I have to work for $7.25. And I bust my butt every day, and I take pride in what I do, gentlemen," Derrell Odom said in the video.

Odom, who works at Kentucky Fried Chicken, said that he served two tours in Iraq, was wounded in combat, and was awarded the Purple Heart. Now, he struggles to make ends meet.

"I worked 45 hours this week and my manager pulled me over to the side and told me that you can't have these five hours of overtime at time-and-a-half," Odom said. "She told me she was going to take my five hours and put them on next week's check so she wouldn't have to give me my time-and-a-half."