The arguments are now bordering on lunacy. Suddenly, minors have all the sensibilities and wisdom of mature adults. And here I thought Republicans didn't think young people were smart enough to even vote. Even more amazing is the divisive and combative ugliness of self righteous Jesus freaks turning Middleton into a religious battleground for their own selfish reasons. Yea, real community minded.

Their names are missing on their website. If you really want to see where Melissa Helbach's family is coming from, check out hubby Casey Helbach's Facebook site. Islamophobia comes to mind. 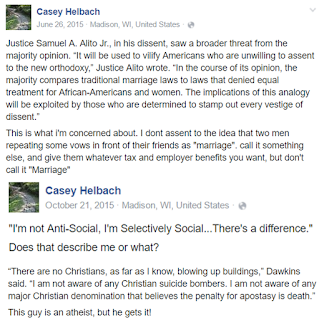 So what is their Christian message? After all, people are under the impression it's all about the teachings of Jesus, no big deal. Perhaps organizer Melissa Helbach's own kid gave us the answer, via one concerned parent: 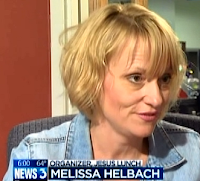 "My daughter has had classes with one of the Helbach (sp) kids. He has openly advocated for killing Muslims as the solution to global terrorism. He's spewed hateful rhetoric while touting himself as "self made". She's been upset and frustrated by his behavior."

Another parent chimed in...

Moreover after my son criticized those comments, both cars in front of our house were vandalized. By someone. Lots of Christian behavior here...

These are minors under the supervision of the school district. They protect and educate our kids, like my two sons. Who are these strangers spreading the "Christian" message, which is whatever they think it is. Imagine other groups trying to influence and indoctrinate a whole school filled with curious minors. Their parents should still call the shots, not Jesus Lunch "moms."

The following video clip is a two parter. . Think they weren't looking for a fight? This video was featured at the Education Action Group Foundation, a supposed "non-partisan" right wing group making the rounds on the Fox News Channel, The Blaze, and the Fox Business Network.

The first half recorded by Melissa Helbach's husband shows the group being greeted by Middleton's Superintendent Don Johnson, who calmly shook hands with them and asked for a little conversation.  You'll hear "talk to our attorney" a number of times. The last half (3:57) features conservative radio's biggest BSer Vicki Mckenna, who fed into the religious rights manufactured hysteria with Jesus Lunch's attorney Phillip Stammen.


McKenna: "They physically blocked them, is what you're saying. They actually physically tried to block them from accessing the park?

Stammen: "Yes, yes, they put cones in the way, and then they confronted them when they walked up, and they wanted to repeatedly keep talking to them..."

Heaven forbid we keep talking...needless to say, the superintend did little to block their efforts.

Just a note, I'm a Lutheran. One of my sons has already been confirmed, and the other is currently taking classes. We're just like any other liberal progressive church going family. McKenna, like all Republicans, have to paint a different picture to make the following hate filled comment work:


McKenna: "What the left needs to do is make believers bigots. They need to turn Christians into monsters, and they need to kill off God."

If you were wondering where the Freedom from Religion Foundation has been, well, their waiting in the wings....here's the last part of their letter to the school district: 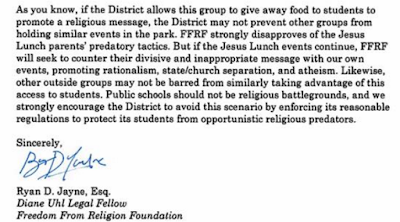 You can keep up to date on all this at the Facebook site, All Middleton Students Deserve Respect.
Posted by John Peterson, Democurmudgeon at 4/17/2016 09:22:00 PM