RIght Wing Blog-Your Entry Through the Looking Glass. It's the "I Know You are But What Am I" Argument. 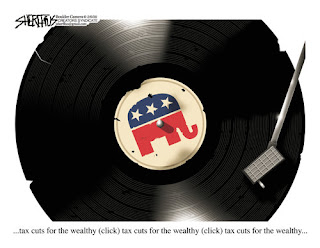 A gift of laughter, and a lot of projection, from the right wing.
I Want To Be A Liberal

By Nancy Morgan from dissectleft.blogspot.com

I want to be a liberal, because then everyone will like me. My family will start talking to me again, and chances are, my ex-husband will want to renew the marriage vows he broke when I started spouting conservative opinions.

I'd like to be a liberal because its ever so much easier to allow others to form my opinions for me instead of researching an issue myself. That always gets me in trouble, especially when the facts I discover diverge from the latest politically correct consensus.

I'd like to be a liberal because then I'd be rewarded for all my shortcomings and nothing would ever be my fault. I'd be an important cog in the wheel of social justice, and a cherished warrior in the current fight for equality.

If I were a liberal, I would be free to have sex whenever and with whomever I want - and be considered 'empowered' to boot. I could abort any inconvenience with nary a thought because my rights to my body trump the life I would have suctioned out of me.

I'd like to be a liberal because any guilt I would normally feel for what used to be considered deviant, irresponsible behavior may be assuaged by merely advocating the expenditure of other people's money on whatever the cause du jour is. Very cool. Especially since my stock portfolio has been pretty much decimated.

I want to be a liberal because they care so much. They have a lock on all the fashionable emotions, like tolerance, diversity, equality and patriotism. And as long as my intentions are pure and I 'care', I won't have to accept responsibility for any negative consequences that my actions might cause.

I'd like to be a liberal because everyone knows that conservatives are racist, homophobic, stupid and, well, beneath contempt. Conservatives are motivated by gasp, profit, instead of being nice. Enough said.

I'd like to be a liberal because I'd be able to redefine reality to my own specifications. I could turn failure into success, murder into choice, lies into 'misstatements', and theft into investment. I would automatically be considered wise, instead of opinionated. Best of all, I could make up the rules as I go along, change them in midstream and then demonize anyone who doesn't agree with me.

I want to be a liberal because everyone knows they hold the moral high ground. They don't lie, cheat or steal. Oh, and they don't condone torture. The media says so, so it must be true.

Before I am able to join this community of man, however, there are a few ground rules:

I have to acknowledge that government is the best and only solution for any problems America has. Despite the fact that pretty much every government solution to date has been a disaster.

I must agree that America is bad and white Christian males are responsible for all that is wrong with the world. Further, I must agree that terrorists and third world dictators are either freedom fighters or misunderstood men of good will. Oh, and I must acknowledge that dialogue is better than war. Even though decades of dialogue haven't worked, things are different, now that Obama is president. I must have faith. After all, the times, they are a changin'.

I'd, of course, be expected to not only condone, but happily embrace gay marriage and the long list of newly minted sexual behaviors, and swear to never mention the adverse health risks or the proven harm they do to traditional families.

I'd also have to quit judging people (except for conservatives). After all, liberals will allow me to do whatever I want, free from moral censure, and its only fair I do the same for them.

I'd have to immediately quit smoking, in public at least. I'd be required to agree that global warming is real and man is the cause. Even though the earth has cooled in the last decade, everyone knows its still getting warmer. I'd also have to renounce Christianity in favor of Mother Earth and believe that the Constitution is a 'living instrument'.

I'd have to agree that victimhood trumps merit and that liberals know best. Always. And lastly, I'd have to support the notion that racism is still rampant, even if it is the silent 'institutional' type.

In return, I'll be accepted, popular, and invited to the best parties. I'll be eligible for the right to housing, health care, a living wage (even if I don't work) and happiness. And as long as I remain a liberal, no-one is allowed to insult me. How cool is that?

I'll finally get my columns published in my own hometown paper and will have a good chance of getting face time on MSNBC. Best of all, I'll be able to atone for my sins by merely paying Algore for a few carbon credits. Then, I will live happily ever after. Isn't that worth sacrificing such ethereal and frivolous notions like freedom, individualism and principles?
Posted by John Peterson, Democurmudgeon at 5/24/2009 10:55:00 AM