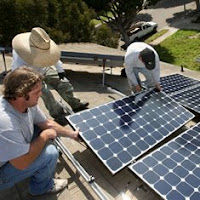 Republicans are pretty angry these days. They're angry about everything. They're angry about mandating higher fuel economy for the cars we drive even though it will save them money at the pump and create a healthier auto industry. They're worried cars will cost and extra $600 more because of the mandate, forgetting the free market might negate the added charge. Paying $4 a gallon is a fading memory. They're against unsightly wind farms but rabid supporters of oil wells and refineries dotting our landscape. Most egregious is their constant criticism of our friend and trading partner Europe.
Republicans will have none of the more innovative ideas and government successes of "socialist" Europe. U.S. exceptionalism is the answer to all our problems. It is also the anchor around our necks. Take green jobs for instance. To conservatives, the jobs created by a green economy is just a liberal wet dream.
Or is it?
How Germany Created Jobs by Going Green
President Obama says investing in a “green economy” can create 5 million jobs in the next 10 years. How? The answer may lie in Germany. The country that is home to Mercedes-Benz and Volkswagen is on its way to making its green sector larger than its auto industry by 2020, according to a recent study.

The government worked to promote a green culture through all levels of society. ”We started with simpler parts, like automating systems in office buildings to use less power,” says Elmar Bollin, a director of research in Baden-Württemberg. Financial incentives were given to people who retrofitted their homes with renewable sources.

The green-jobs creation program costs the average German family $38 per year on its utility bill.
The country leads Europe in developing and exporting green technology, generating $240 billion in annual revenue. And the German government continues to lead by example: Its parliament building is set to run solely on green energy. — Susan Fine, Parade Magazine
No way. Germans must be crazy to pay an extra $38 a year, just to create jobs and become a world leader in exported green technology.
And anyway, who wants to be like Europe?
Posted by John Peterson, Democurmudgeon at 5/25/2009 08:50:00 AM