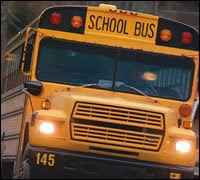 "Why School Vouchers Don't Matter" by Kevin Carey in the Chronicle Review laid out what I consider one of the best arguments against voucher schools (beside my own comments and a few educational blogs listed in the side bar). I’ve shortened the content to highlight his views.

There’s a strong element of artifice to this whole debate. The D.C. voucher program does not represent serious public policy. It was a P.R. move … to the privatization crowd it marginalized by supporting NCLB. The voucher dream has always been to introduce market dynamics to public education ...The D.C. voucher program does none of these things. No new schools have been built as a result, no groundbreaking programs created, competition spurred, or innovators attracted … charter schools are actually creating the whole range of market responses that vouchers are not.

D.C. charter schools are directly accountable to the public and specifically designed to serve urban students. Why would it be better to re-direct public funds to schools that are neither of those things? … the real purpose of school vouchers — givingpeople the opportunity to scramble for the moral high ground of defending disadvantaged youth … In that sense vouchers do have some utility — they separate people who are serious about education policy from people who aren’t. The more you shout and carry on about them, the less you’re paying attention to the issues that really matter.

The one point that needs to be stressed here is “accountable to the public” and “designed for urban students.” For conservatives, accountability is their number one concern, yet never a part of the voucher discussion. But Kevin Carey wasn’t the only one dashing the voucher myth. The following comment hit on a few major considerations.

“…there remains the point that some parents among the lower classes do not understand educational opportunities when they are presented to them. Nor would they be able to make informed choices on their children’s behalf. For instance, just tonight I had a heated discussion with my working class mother about my nephew being admitted into a program for gifted youngsters at his public elementary school. She thought it would be a waste of time. For me, this explains why I received very little emotional support for choosing to get any sort of higher education. To paraphrase my mom: The regular classes are enough.

Some studies suggest that a similar attitude becomes more common the lower down the economic ladder we look. To ignore this obstacle, and pretend every parent has the capacity to make the same informed decision a college- or law school-educated person can make, remains one abiding problem with the voucher system. Choice does not automatically level the playing field if the choosers have different backgrounds informing those choices.— Cassandra

My own two cents: Long waiting lists for good voucher schools leave everyone else the poor to average schools (with no way to weed them out). In the future, corporate buy outs and consolidation will create private for profit school monopolies over time. Tuition increases price parents out of some of the better schools resulting in: Expensive K-12 education savings accounts the poor and middle class will not be able to fund. That in turn creates a class system of education.
One more thing. With the Republican record on race, it’s more than obvious their concern about inner city kids getting a better education is the last thing on their minds. It’s time we stop avoiding the issue and call them on it. Let’s finally get serious.
NOTE: Jim Horn digs deep into the latest Charter school research, including virtual school results that don't look so good. I'm still trying to absorb the information.
Posted by John Peterson, Democurmudgeon at 5/12/2009 11:29:00 AM

Labels: Vouchers
Email ThisBlogThis!Share to TwitterShare to FacebookShare to Pinterest