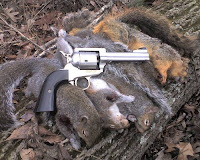 A Republican Congress and president couldn’t pass a gun bill allowing national parks visitors from carrying loaded and concealed weapons, but a Democratic Congress and president are about to do just that. And it’s down the rabbit hole again, this time with our spineless liberals friends, and the NRA driven right wingers notching a big one for fellow fringers.
While Democrats fold under pressure from Republicans about removing unrelated amendments on important legislation, those same rules don’t seem to apply to the party of conservative gun crazy bullies that inhabit our Congress. Instead of shaming Republicans for slipping the amendment in, even Obama is slinking away from any confrontation, Democrats appear to be encouraging similar amendments into future legislation.
I’m disowning the Democratic Party right now. The NY Times:

Advocates of gun rights are poised to win a Congressional victory that eluded them under a Republican president. House and Senate lawmakers and aides say it now appears likely that President Obama will this week sign into law a provision allowing visitors to national parks and refuges to carry loaded and concealed weapons. The gun provision … was added to a popular measure imposing new rules on credit card companies. But the Democrats who now control both Congress and the White House appear ready to allow it to survive rather than derail a consumer-friendly credit card measure.

“Timing is everything in politics,” said Senator Tom Coburn, Republican of Oklahoma and the champion of the gun proposal. Gun control and conservation groups … joined top House Democrats in lamenting the inability of Senate Democrats to prevent Republicans from adding such politically charged proposals to unrelated legislation.

More gun crazy crap is on its way:

A gun measure has also tied up a bill granting the District of Columbia full voting representation in the House, and Republicans are readying other gun rights initiatives for future consideration.

For their part, backers of the gun provision were relishing their looming victory. “After using every legislative trick in the book to prevent a vote on gun rights, Democrat leaders are finally crying uncle and clearing the way for Congress to reinstate the Bush policy,” said Representative Doc Hastings of Washington, senior Republican on the House Natural Resources Committee.