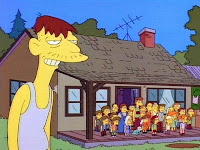 Is it me or are the health care issues raised by Republicans just plain stupid. All it would take is a dash of common sense and experience. Even a simpleton could explain away their straw man concerns. For instance:

The easy simpleton response: Medicare is a high risk pool of citizens. Of course it’s going to be expensive, since it is not funded by healthy individuals paying into the system and spreading the risk. All high risk plans will cost more than a plan that includes everyone. Is it possible a senior Senator can get away with “acting” like he still doesn’t get it? We really shouldn’t tolerate it, should we?

Mr. Kennedy said: “Americans want the choice of enrolling in a health insurance program backed by the government for the public good, not private profit. So that option will be available.” Consumers, he said, will be able to enroll in “a publicly sponsored and guaranteed plan.” But insurance companies and Republican lawmakers say a public plan could drive private insurers out of business and lead eventually to a single-payer system run by the government.


Let me get this right. If people gravitate to a public plan because it saves them money, then we should remove this option from health care reform? That makes perfect sense. And I guess the “for profit” companies should be saved even though they are no longer affordable and are no longer relevant? I’m reminded by our Republicans friends, during their tea party protest, that the government is us (hell, we've been saying if for years). Why shouldn’t “we” insure ourselves and save money? Is there a written guarantee in our Constitution to preserve and protect insurance companies? How can the public be so right about their own financial health?

Public opinion polls suggest that many consumers would like to have the choice of a public plan. But insurance companies and Republican lawmakers say a public plan could drive private insurers out of business and lead eventually to a single-payer system run by the government.

Get serious. Do we really give a rats ass about what the Republicans and insurance companies want? They have had their way since the New Deal and look where we are today.

Which brings to mind my favorite quote: “God I hate these people.”-Mike Malloy