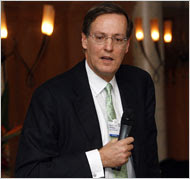 In the following NY Times article about the investment speculators who bankrupt Chrysler, not one word is mentioned about the job losses and economic pain dissolving the auto maker would have on the American worker, so these greedy bastards could make their money. After all, they bought Chrysler stocks low anticipating making off like bandits in a bankruptcy fire sale of secured assets. This is the bottom feeding business they’re in, and proud of it. Notice in this story the brutal disconnect of these hedge fund snakes, or as President Obama called them, “a small group of speculators.”

Peter A. Weinberg (pictured here) and Joseph R. Perella are part of a band of Wall Street renegades — “a small group of speculators,” President Obama called them — who helped bankrupt Chrysler.

The NY Times writer, ZACHERY KOUWE, then began to spin the story in a decidedly defensive capitalist way. Like this:

That, anyway, is the Washington line. In fact, Mr. Weinberg and Mr. Perella … are the epitome of white-shoe investment bankers … But now the two men, along with a handful of other financiers, are being blamed for precipitating the bankruptcy of an American icon.

The truth hurts doesn’t it, poor things. After all, this is the kind of business their in. A business that doesn’t sacrifice anything except the company targeted for breakup.

As Chrysler’s fate hung in the balance Wednesday night, this group refused to bend to the Obama administration and accept steep losses on their investments … Chastened, and under intense pressure from the White House, the investment firm Perella Weinberg Partners, abruptly reversed course. In a terse statement issued shortly before 6 p.m. Thursday, Perella Weinberg Partners announced it would accept the government’s terms. It was too late … other Chrysler holdouts … OppenheimerFunds, insisted it would not back down. But whatever the outcome, this bit of brinkmanship … has become yet another public relations disaster for Wall Street.

No kidding. What we’re seeing is the side of business the Republicans never reference as they convince more Americans that the government is being unfair to them. But Kouwe continues to portray these hedge fund bottom feeders as victims:

Representatives for Perella Weinberg … initially defended the firm’s decision … as a principled stance against the administration’s growing intrusion into American business.

These ideological Ayn Randers sure showed us, didn’t they?

But now that Chrysler has tipped into bankruptcy, some industry executives worry the administration will try to turn this episode to its political advantage. Washington, these people contend, needed some political cover for the mess in Detroit — and Wall Street provided a handy scapegoat. A move is already afoot to tighten oversight of hedge funds and end certain tax benefits for private investments funds. The Chrysler bankruptcy, and Wall Street’s role in it, will make resisting those efforts more difficult.

Another words, they cooked their own goose. Their “principled stance” resulted in a long over due backlash.

What is striking to many in financial circles is how much Chrysler’s reluctant creditors gambled for what is, in the scheme of this bankruptcy, a relatively small amount of money. After weeks of increasingly rancorous negotiations, Perella Weinberg and 17 other financial firms — rejected the administration’s plan. It was, they argued, simply unfair.

What was fair were the large numbers of displaced Americans out of work and the disappearance of an American auto manufacturer.

The Treasury offered to pay all of Chrysler’s senior lenders $2.25 billion in cash if they forgave most of the company’s debts. Perella Weinberg and the others demanded more, arguing they would receive at least that much, and possibly more, under ordinary bankruptcy proceedings … Many of them bought Chrysler debt for about 30 cents on the dollar, long after it became clear that the company was in trouble. Most of this debt is secured by Chrysler assets … The thinking was that in the worst case, these assets could be sold at a profit if Chrysler were liquidated. The dissident creditors said they had a fiduciary responsibility to seek the best possible returns for their own investors … The creditors suggested banks that had received bailout money were being strong-armed by the administration, a view some of the bankers privately said they shared.

Victim hood is a conservative badge of honor and their ace in the hole. It’s worked before. It doesn’t seem to be working now.

Perella Weinberg and others … stand little chance of prevailing in court, bankruptcy lawyers said. “Saying they have an uphill battle is an understatement,” said John C. LaLiberte, a bankruptcy lawyer … Even those involved in the negotiations see little upside in fighting. “There’s zero chance this group will be able to get anything more in bankruptcy court given that 90 percent of the lenders are lined up against them,” said a hedge fund manager who owns about $10 million of Chrysler’s secured debt and voted for the government’s proposal.

Our tour of Wall Street’s corporate mindset and its penchant for human sacrifice should be a warning. Hedge fund regulation, here we come.
Posted by John Peterson, Democurmudgeon at 5/01/2009 09:55:00 AM