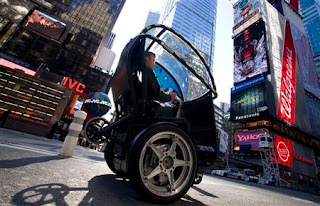 The Volt: What was GM thinking when they developed an energy efficient vehicle and price it out of reach for most average Americans to buy. $40,000? Why not develop the Volt as an affordable $20,000 car that would fly of the showroom floors, rejuvenating the company’s sales figures? Here we go again.

The PUMA: The Personal Urban Mobility and Accessibility two wheeled vehicle based on the Segway, may be a great idea but appears to have limited market appeal and could be a decade away from actual implementation. There’s nothing wrong with having a few irons in the fire, but I hope there is a more publicly imaged “next step” on the drawing boards. According to AP:

A solution to the world's urban transportation problems could lie in two wheels not four, according to executives for General Motors Corp. (GM) (GM) and Segway Inc. The companies announced that they are working together to develop a two-wheeled, two-seat electric vehicle designed to be a fast, safe, inexpensive and clean alternative to traditional cars and trucks for cities across the world.

The Personal Urban Mobility and Accessibility, or PUMA, project also would involve a vast communications network that would allow vehicles to interact with each other, regulate the flow of traffic and prevent crashes from happening. As a result, the PUMA vehicles would not need air bags or other traditional safety devices and include safety belts for "comfort purposes" only.

The 300-pound prototype runs on a lithium-ion battery and uses Segway's characteristic two-wheel balancing technology, along with dual electric motors. It's designed to reach speeds of up to 35 miles-per-hour and can run 35 miles on a single charge … its total operating cost - including purchase price, insurance, maintenance and fuel - would total between one-fourth and one-third of that of the average traditional vehicle. If Hummer took GM to the large-vehicle extreme … the PUMA takes GM to the other. Larry Burns, GM's vice president of research and development, said nothing new needs to be invented for it to become a reality.
The automaker is looking for a place, such as a college campus, where the vehicles could be put to use and grab a foothold in the market.

With regards to “preventing crashes:” Wouldn't out of control cars not on the GPS system still be a BIG problem in head on collisions, and still necessitate air bags and functional seat belts…?
Posted by John Peterson, Democurmudgeon at 4/07/2009 11:15:00 AM