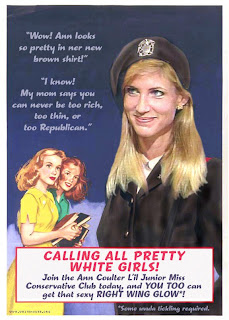 My crazy conservative, born again and concealed carrying (not legal in Wis.) friend sent me this commentary from Ann Coulter. He apparently thought she was making a reasonable point about the recent Obama firing of GM’s Rick Wagoner. Coulter’s “WHY IS RICK WAGONER FIRED AND NANCY PELOSI STILL WORKING?” is a real piece of work. Here’s just a sample:

Apparently, it's OK for Obama to fire the head of General Motors, but Bush can't fire his own U.S. attorneys. It is generally agreed that the Obama administration's demand that Rick Wagoner resign as chairman of General Motors is the price of GM's accepting government money. Now that we're all agreed that the government can make hiring and firing decisions based on infusions of taxpayer money, I can think of a lot more government beneficiaries who are badly in need of firing. Just off the top of my head, how about Barney Frank, Chris Dodd and everybody at the Department of Education? How about firing all the former Weathermen, like Bill Ayers, Bernardine Dohrn and Mark Rudd, whose university salaries are subsidized by the taxpayer? When is the government going to get around to firing 99 percent of public school superintendents? They're clearly turning out an inferior product -- i.e., America's public school graduates.

If Obama can tell GM and Chrysler that their participation in NASCAR is an "unnecessary expenditure."

Doesn't PBS take federal funds? Obama should really ask Big Bird to step down. Capitalism has its own methods of clearing out dead wood, which the government keeps preventing by forcing the taxpayer to bail out capitalism's losers.


Here’s my response to my old conservative bud:

Thanks for the crazy Coulter comment. Wow, she's nuts. The people she wants to fire are people she disagrees with ideologically. Not because they have brought down the capitalist system Democrats want to save, but because they are liberal. Sounds like a dictatorship to me. What a great world it would be if we could just do away with decent, and fire everyone in the opposition party receiving taxpayer money. They would be putting in place one party rule...oh wait, Republicans in Congress are saying one party rule is bad now, after being the ruling party for 6 years.

Then again didn't the Republican Congress spend like drunken sailors and avoided going after those gaming the system, like the banks and Bernie Maddoff, thus bringing down the global economies? Using Anne Coulter's own system of firing, we should then get rid of the entire Republican Party in Congress for getting us into this mess, because they were paid with taxpayer money. Unless of course conservatives are now willing to admit Democrats hate big government regulation like Barney Frank and Nancy Pelosi. Or are they trying to have it both ways, as long as nobody notices?

By the way, "If Obama can tell GM and Chrysler that their participation in NASCAR is an "unnecessary expenditure," was an April fool’s joke in an online auto magazine page. Coulter believed it. Good God!