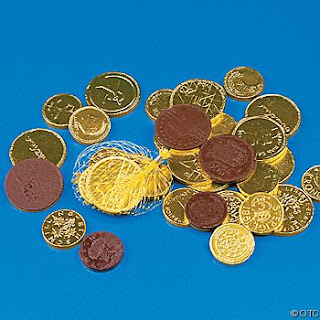 I thought this financial news tidbit offered some relief from the avalanche of bad economic reports we’re so used to reading. The Financial Times title drew me in:
Chocolate coins are now deemed safer than gilts
As Alistair Darling (the British Treasurer) produced his Budget goodies on Wednesday, he would have done well to peek at something which might be dubbed the “chocolate” metric. In recent months the cost of insuring against a default on UK gilts (a bond issued by the UK government) has surged as investors have fretted about the ever-spiralling levels of British debt.
But if that is embarrassing enough, the cost of insuring the chocolate giant Cadbury was on Wednesday far lower. A company that peddles chocolate coins, in other words, is currently deemed a better credit bet than the British Treasury itself.
Maybe my kids were right to hold on to their gold chocolate coins after all.
Posted by John Peterson, Democurmudgeon at 4/24/2009 09:29:00 AM

Labels: Economy
Email ThisBlogThis!Share to TwitterShare to FacebookShare to Pinterest