Both Free Speech and Police attacked by Wisconsin Republican over his own Paranoid Visions and Love for AR15's!

Wisconsin is turning up the Trumpian lunacy by attacking law enforcement here now!!!

GOP lawmaker lashes out at Capitol Police after investigation of alleged threat ends without charges.

If only a paranoid gun loving Republican lawmaker like Rep. Adam Jarchow could just arrest people when he imagines he's been rubbed the wrong way, you know, send out a warning shot free speech will not be tolerated. 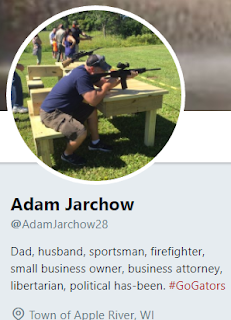 An investigation into an inflammatory social media post by a Houlton man that was flagged by a Republican lawmaker as potentially threatening has ended with no charges. Capitol Police contacted Garry Fay, 60, after an aide to Jarchow alerted them to a social media post in which Fay was critical of Jarchow’s support for an AR-15 semi-automatic rifle. Fay was reacting to a previous Twitter message from Jarchow in which he stated he loved his AR-15.

As you can see, Jarchow is real sensitive-like when it comes to high school students nationwide demanding a ban on military weapons!

This is the supposed "threat," which was basically shooting off a few rounds...with no mention of shooting at people. Unless that's what guys like Jarchow automatically think:


“Is he saying he wants us to visit his children’s school with AR 15s and lots of magazines to shoot off a few rounds to prove we love the 2nd amendment as much as he does?” Fay wrote. “Then we should shoot up his church and home and finally go gonzo on Congress itself?”

Fay told a police officer he posted the comment because he was disturbed by Jarchow’s Twitter message given “everything going on in the world,” according to a Capitol Police report. The officer responded that Fay’s social media comment could be taken the wrong way and interpreted as a threat. Fay said he didn’t own any guns and never planned to own any. “Capitol Police investigated the incident and determined the Facebook post was not a credible threat.”

Having visited Jarchow's twitter page, man, this guy's got anger issues...keep guns out of his hands. I'm requesting police do that now:


In a series of tweets Thursday afternoon, Jarchow criticized Capitol Police for not contacting him after it concluded its investigation and called it a “bozo operation. I guess now you can threaten the family of public officials so long as when the cops ask about it, you say ‘just kidding. The moronic things people get tickets for and this (expletive) gets zip? Next time I hope he says it to my face.”

That a "threat?" Maybe then you can use your AR 15, right? Again, why isn't someone flagging Jarchow's tweets as possible threats so police can take away his weapons? 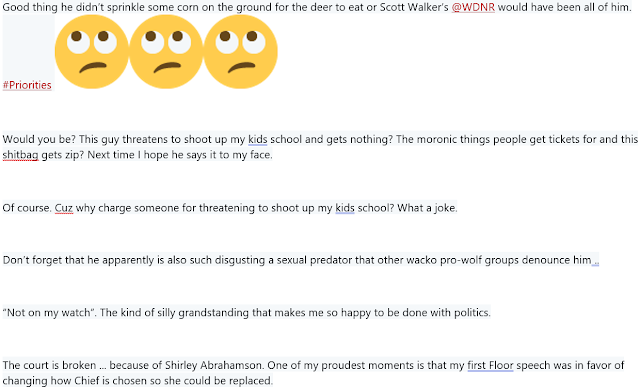