Wow, where do I even start going down this series of right-wing rabbit holes? The Hill posted an opinion by Joe Concha that exemplifies the rampant weeping victimhood that has been exploited so perversely by those brave but cowering "real American" Republicans.

As pointed out by Concha, it all started with the brutal and mindless potshots leveled at Parkland school shooting student David Hogg, a supposed puppet of liberal villain George Soros:


"Ludicrous claims of him being a child actor or being coached soon followed and have, thankfully, been dismissed by those not living in a world of conspiracy theories or blinded by pure partisanship."

Free Speech has Consequences?: Conspiracy theories come and go quickly, so the only thing left in the Republican arsenal? Personal unrelated attacks, like Laura Ingraham's attempt to discredit Hogg via his grade point average? Good one... 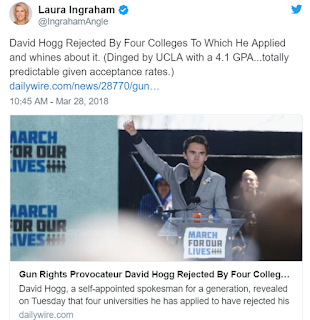 Hogg responded by listing 12 prominent advertisers of "The Ingraham Angle" in calling on a boycott. He proceeded to expand the list to 100 by sharing a list by Media Matters ... Notably, Hogg chose to accelerate his boycott effort after Ingraham's apology.

Silencing Conservatives? Hogg's call to boycott Ingraham's advertisers isn't an attempt to silence anyone, but it is an attempt to hold character assassins accountable for their words. Period.

As Concha pointed out in his crybaby opinion piece, right-wing "victims" are faced with two dangers:


1) Fear of reprisal for criticizing Hogg, who has the benefit of being protected from any criticism while being free to level it.

2) Fear of being seen as "the person attacking a mass-school-shooting survivor," regardless of whether there's a basis for such criticism or not.

Don't forget, poor helpless Laura Ingraham has media giant Fox News behind her, while Hogg has only himself and his ideas.

Concha stuns the senses making it seem like Hogg was being unfair, by praising victim and national conservative columnist Ben Shapiro for speaking out. Oddly it was Shapiro's own publication that ripped Hogg's college rejections, so Shapiro should actually be the last person to make the following argument:


Ben Shapiro. "I look forward to Hogg's apologies to Republicans ('sick f***ers'), Dana Loesch (she was 'hypocritical and disgusting' for criticizing Broward Sheriff Scott Israel), and Marco Rubio (he said Rubio was bribed by the NRA to give away children's lives)," Shapiro wrote in the online publication he founded, The Daily Wire. "You may not like what Ingraham said. You may disagree with it. I did. But it isn't remotely CLOSE to the level of viciousness with which Hogg has attacked people who disagree with him," Shapiro added.

From the party of Hollywood actor Ronald Reagan, Arnold Schwartzenegger and now TV reality superstar Donald Trump; guess what, these students are now pawns of big money...forget that they have the backing of the American people. From a tweet storm posted by crazy conservative Parkland student Kyle Kashuv:


1. The #March4OurLives had so much potential to be pure and grassroots but became very far from that. It was exactly what conservatives hate and what liberals love. At this point, with millions of dollars involved, every student, including myself, became a pawn in a game of chess.

2. They've agreed to work with organizations like the Woman's March who have affiliations with Lewis Farrakhan - a known antisemite. Regardless of what they think, the cause was hijacked by Hollywood and became a Hollywood event.

3. The media took interest in him to push an agenda. They've propped people up and have turned them into shields. I am not doubting anyone's sincerity, but people have certainly been hiding behind my classmates to push an agenda.

"Not doubting anyone's sincerity"? No, not at all.

Finally, finally...I am forever amused by Republicans who think that criticism means they're being silenced, that they're somehow "not allowed" to exercise their First Amendment right.