A Special Note: My conservative Trumpian friend in Milwaukee called and trashed Walker and Fitzgerald. There's a possibility that this isn't going as well as the scheming Republicans think it is.

When Scott Walker and the Republican lawbreakers ignore laws and get caught, they change the law. It's their "privilege. And that's what's happening with the special election law: 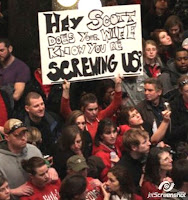 Dane County Circuit Judge Josann Reynolds — who was appointed to the bench by Walker in 2014 and elected to a six-year term the following year — blistered the governor Thursday for refusing to call the special elections and ordered him to do so within a week.

Walker bashed the actual group representing Wisconsin voters in court because that group, headed up by former AG Eric Holder, was from D.C. Yes, it's an oddly insulting argument to make when you've got no real point to make. Crash and burn time just before the election?


Walker — even before the formal legislation had been made public — said that he would sign the bill. “A D.C.-based political group wants to force Wisconsin taxpayers to waste money on special elections at a time when our Legislature is ready to adjourn for the year,” Walker said.

If that wasn't bad enough, Fitzgerald made it clear who the judicial branch is supposed to serve under a Republican authority:

Fitzgerald criticized the tone of Reynolds’ ruling in which she questioned why Walker didn’t call for special elections to fill the vacancies as required by law. On Thursday, Vos criticized Reynolds as an “activist Dane County judge,” which prompted Fifth Judicial District Chief Judge William Hanrahan to demand an apology.

Yet judicial criticism is not tolerated by our all-knowing overseers, who continue to play the role of victim despite being in complete control of the legislature for the last 7 years.

In one of the most bizarre statements yet, offering a revealing look at just how power corrupts, Fitzgerald wants the Chief Justice to punish the lower court judges. You read that right:

Fitzgerald said Reynolds’ and Hanrahan’s public statements were “way out of line” and reflected a larger problem with Dane County judges being hostile to conservatives and Republicans.

He called the Fifth Judicial District a “laughing stock” in the state and said he would talk with Wisconsin Supreme Court Chief Justice Pat Roggensack about the situation.

“All of those comments about the governor were just way out of bounds,” Fitzgerald said. “I would hope that Justice Roggensack would police that.”

I can't wait to see what Roggensack does with this hot potato. Standing up for voters in Dane County and elsewhere, Hanrahan's public statement didn't hold back...

Hanrahan: “You took the low road. With a broad brush, you have not only needlessly besmirched my reputation and that of my colleagues, you have also gratuitously denigrated the good citizens of Dane County. And frankly, in the process, you have also sullied your own reputation, diminishing any hopes of being taken seriously as a statesman.”

But even more interesting; Hanrahan appears to be an old-fashioned apolitical judge like they're supposed to be. Well, how about that...


Hanrahan, a former state assistant attorney general who heads the state’s Fifth Judicial District wrote, that he is neither liberal nor conservative, but a “non-partisan member of the Third Branch of state government.”