CapTimes: Walker said he has had several conversations with lawmakers who are drafting a comprehensive school safety legislative package. Walker could call a special session to bring lawmakers back to the Capitol.

NRA Money? Lot's of it? Walker not Influenced? Like the Supreme Court said in Citizens United, money does not corrupt:

Walker, who received about $3.5 million from the National Rifle Association for elections in 2010, 2012 and 2014, disputed the argument that contributions from gun rights groups influence policy. He noted that he differs with the group on whether to give firearms to teachers.

Opposing that obviously crazy idea to arm teachers now qualifies as a brilliant decision by our governor? The bar is that low now?

Walker will Solve Mental Health Failure He Created with Funding/Job Cuts: Maybe we should crack down on the mentally ill? 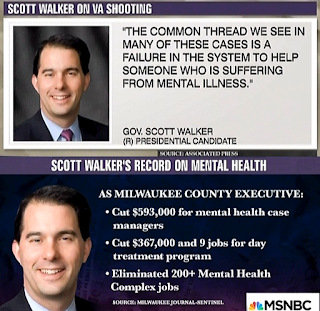 Yet the party deemed not responsible enough to govern had a few suggestions...


An effort by Senate Democrats to allow schools to exceed their revenue limits to implement school safety plans was blocked by the Republican majority last week. Democrats have also proposed reinstating a 48-hour waiting period for handgun purchases, banning the sale of bump stocks and banning anyone with a domestic violence misdemeanor conviction from owning a firearm.


Parisi: "It used to be, that there was an exception in the levy limits that would allow schools to spend more money for safety enhancements like that. Gov. Walker also eliminated that exemption to the levy limit, making it more difficult for schools to do that."

Make no mistake, Scott Walker and the Republicans own these mass shootings and the civil decay gun madness brought with it. In fact, Republicans are now trying to blame the gun carnage on gay marriage, liberalism, socialism, the pill, video games, movies, and racial equality...not guns.

Sure, let's change human nature first, got it.

Yet guns keep killing people and Republicans keep pushing myth after insulting myth. Dare we even look at the evidence?