The Scary Desperate Scott Walker Twitter Tantrum; What is it with Liberals and Blacks?

The juvenile Trump-like tweet storm spewing out from the fingertips of Gov. Scott Walker is the first truly honest look at who this career politician is behind those sleepy sociopathic eyes.


Walker's casual off-handed rejection of holding special elections for two vacant legislative seats because it was a "waste of taxpayer resources" flipped representative government on its head, and the judicial branch reacted quickly:

After a three-month delay, a lightning-quick lawsuit and three orders from as many judges, Wisconsin Gov. Scott Walker called two special elections Thursday and GOP senators dropped legislation to block the contests.

The Divider and Conqueror Tantrum blames Liberals and Blacks: The lingering question; why did it take former AG Eric Holder to go to challenge Walker in court?

Having not learned anything about his legal obligations, a Walker tweetstorm started off by questioning all three of the court's independently reached decisions, using every dog whistle in his holster; "Obama" "Eric Holder," the fact they're both black, and "D.C. based special interests (that Republicans oddly don't have?):

That's fundraising gold right there, and Walker is on it! Especially when you pair that up with a wagging finger and the angry face below:

Reinforcing the idea that only conservatives work hard and have personal responsibility, send money now...:

...because those bad old liberal Democrats are now trying to use the law to raise campaign funds, nothing like the righteous Republican Party?

Unlike Republicans who took control in 2010 and gerrymandered safe voting majorities for the last 8 years, Democrats are scheming to do the impossible; "permanently change" districts! Ah, a little projection there maybe? Oh, and dog whistle "Nancy Pelosi?"

Here's hoping even Republican voters are seeing through this bizarre (hopefully) career ending and costly Walker fiasco, I know my conservative Trumpian friend in Milwaukee has: 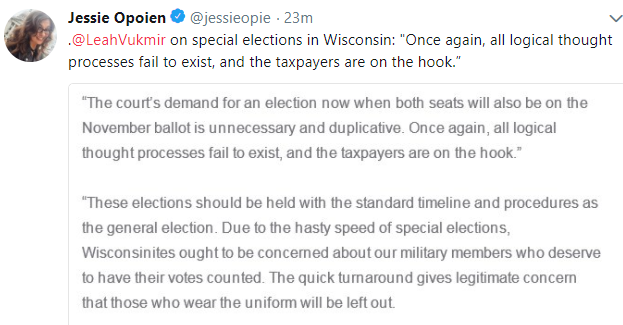 Democratic Challenger: Take a look at who is running for that senate seat: 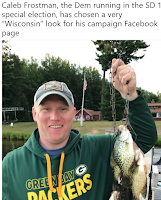 Less than an hour after Walker called the special election, Door County Economic Development Corp. Executive Director Caleb Frostman announced he would run as a Democrat in one of the open seats. The 1st Senate District includes Door and Kewaunee counties and parts of Brown, Manitowoc and Calumet counties.

"Frostman," really, up north there on the frozen tundra?

Compare his photo to De Pere Rep. Andre Jacque, who is such an ass***e not even many Republicans want to have anything to do with him: 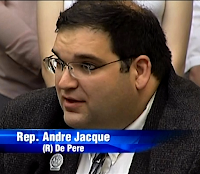