The Children: For example, here are the fearless articulate messages we're hearing from high school students:

The "Adults:" Now here are the "look over there" distractions being sold first, by Wisconsin's own embarrassing NRA sellout Paul Ryan, who couldn't look or sound more ridiculous:

and this position...where "we has the wisdom."

Republicans are Everything They Say We Are: We have to come up with a new word to describe those blindly hypocritical "real Americans." It's not funny or ironic anymore. How do you have a debate with someone who has no self-awareness at all? For instance...this kid's protest sign and the fact that schools had to cancel their protests due to what, armed threats? 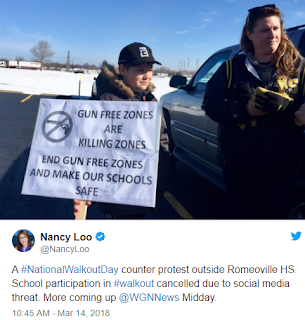 Schools Try to Stop Student Protesters with Threats, Suspensions: Those "constitutional conservatives" out there never did like the First Amendment much. You know, this part...the "right of the people peaceably to assemble, and to petition the Government for a redress of grievances" lacks the necessary obedience-to-power Trumpian right-wingers can't get enough of.

First, from the Waukesha School District, in the words of one student there:


As students at Waukesha North march and walk out to create a movement, we are being faced with threats of truancy tickets from an administration which has backtracked their own statements to the point of incoherency. First, student organizers at North were threatened by the School District of Waukesha for any type of advocacy in any way pertaining to them or their students. After the district's statement made national news on CNN, Todd Gray gave an interviewing denying his stance against students taking part in the movement.

Then again, they changed their stance, with principals giving guidelines to something closer resemble an assembly than a protest. Still, we tried to find a compromise. The realization that they were warping our ideas beyond recognition came when we were told we couldn't call it a walk out or a protest. The same administration with the audacity to tell us that The Women's March, a group actively advocating for legislative change so that it's harder for students to get hurt, was using us to push their own agenda, turned out to be using us to warp and quiet the story.

And so many others...


Nevada school administrators threatened to withhold students’ diplomas and kick students off sports teams for participating in the walkout.

Students in Texas were told they would be suspended if they protest gun violence, on the same day a local 14-year-old was charged over a shooting threat..."All will be suspended for 3 days and parent notes will not alleviate the discipline ... A school is a place to learn and grow educationally, emotionally and morally. A disruption of the school will not be tolerated.”

A number of high schools cancelled or postponed their planned walkouts after receiving anonymous violent threats related to the protests. In Broughton High School in Raleigh, North Carolina; Hackensack High School in Bergen County, New Jersey; D.C. Everesthigh school in Weston, Wisconsin; Mukwonago High School in Wisconsin; and Romeoville High School in Illinois, protests were cancelled or postponed because of threats, sometimes in instances in which the threats were found not to be credible, out of an abundance of caution. In one instance, Shikellamy High School’s protest in Pennsylvania was cut short because of the threat of a drive-by shooting. Clearview Regional High School and Clearview Middle School in Gloucester County, New Jersey, were closed entirely because of an anonymous threat.

And finally...a school that forced their students to take a side: 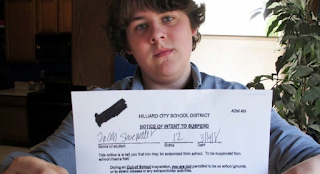 An Ohio high school student has found himself at the center of political controversy after an online post about his suspension for staying in class during the national student school walkout went viral ... he chose not to join his classmates because he didn’t go to a designated area of the school where the non-protesters were supposed to be, he didn’t want to choose a side, and instead stayed by himself in a classroom.

On social media Shoemaker’s now-viral suspension slip has been spun into a tale about how a liberal school system impeded the rights of a student who supported the Second Amendment, On Twitter, users shared Shoemaker’s photos of the suspension slip with hashtags such as #GunControlNever and #LiberalismIsAMentalDisorder. One person tweeted, “To paraphrase George Orwell, some speech is more equal than others.”

To all the students who suddenly realized they all have truly remarkable power. Their message is so clear and so well-stated that it stands in stark contrast to the mindnumbing nonsense spewed out by Republican politicians. 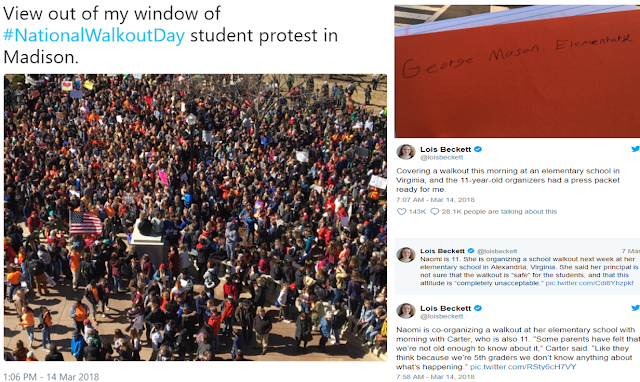 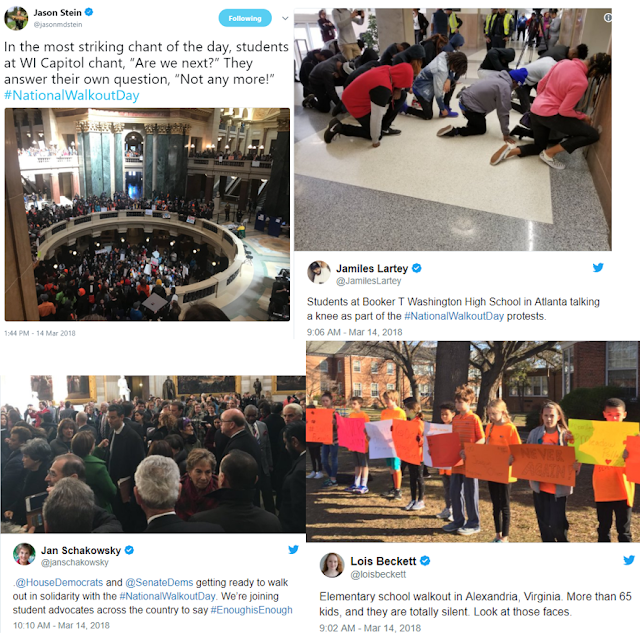