When Republicans say they wanted to change the American culture, wow, they weren't kidding. They even said it was the only way to solve the problem of mass shootings.

Yet while they're opposed to the horrors of liberal cultural "social engineering," they never said they were against a more social conservative kind of engineering.

Here's one of  the ruthless underhanded reasons why:


(In 2014) Cambridge Analytica had secured a $15 million investment from Robert Mercer, the wealthy Republican donor, and wooed his political adviser, Stephen Bannon, with the promise of tools that could identify the personalities of American voters and influence their behavior. So the firm harvested private information from the Facebook profiles of more than 50 million users without their permission, according to former Cambridge employees, associates and documents, making it one of the largest data leaks in the social network’s history. The breach allowed the company to exploit the private social media activity of a huge swath of the American electorate, developing techniques that underpinned its work on President Trump’s campaign in 2016.

Today the denials are flying...but with Democratic pushback: 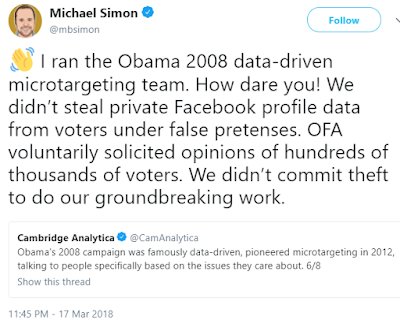 Whataboutism is Back: The "WhataboutObama" contingent quickly pointed to a Guardian article that, no surprise, did not support their case. There's a difference between knowingly using your Facebook account to sign into the Obama campaign, or deceptively completing a Facebook survey that secretly gave permission to use both your information and your friend's for the Trump campaign. Ya think?

Listen to the NPR audio story, and read the NY Times story, which is just amazing:

Facebook has suspended the data analytics firm that the Trump campaign relied on during the 2016 election, saying the firm improperly received user data and then may have failed to get rid of it.

U.K.-based professor Aleksandr Kogan came up with an app billed on Facebook as a personality predictor "used by psychologists." About 270,000 people downloaded "thisisyourdigitallife," according to Facebook, and in doing so gave away their data; some — depending on security settings — even gave away information about their Facebook friends. Although users may not have realized it, the mining of their personal information was aboveboard; just by downloading the app they had — knowingly or not — consented to giving it away. But they did not consent to Kogan giving it away, Facebook says. And when Kogan passed on their data to Cambridge Analytica, he violated platform policies against sharing information with a third party. (Facebook changed its rules three years ago to stop developers from seeing information about people's friends.)

It's all about winning, just like they told us over and over:


According to the newspaper, "the firm was effectively a shell" based in the U.K. and run by foreigners whose contracts with American campaigns — including that of presidential hopeful Ted Cruz — possibly violated Federal Election Commission rules. Around 30 million of those profiles contained enough information to build psychographic profiles.