This is only one of two huge developments that might even stun the senses of die-hard Scott Walker fans.

We're finally finding out that beyond Foxconn's ever changing plans, Scott Walker, Paul Ryan, Trump, and EPA's Scott Pruitt decided to ignore EPA scientists and game the system to benefit business over peoples lives. This is what Republicans are talking about when they say they're trying to "balance business with the environment." It's an absurd concept.

Trading your Life for Business Special Interests: Now you know how you rate in the eyes of Walker and the Republicans, and it's behind polluting business interests:

Chicago Tribune: The Trump administration exempted parts of the Chicago area last year from federal limits on lung-damaging smog, it delivered a huge financial break to steel mills, chemical plants and other industries that are some of the region’s biggest polluters.

Scott Pruitt, who at the time headed the EPA, also freed the Foxconn Technology Group from spending millions of dollars on pollution-control equipment in an area with some of the region’s dirtiest air.

Newly released emails show EPA scientists strongly objected to Pruitt’s decision, which they said could not be supported with data despite political pressure from Trump administration officials and Paul Ryan ... an EPA staff analysis concluded Wisconsin is at least partially responsible for its own smog problems, and documents filed with the Wisconsin Department of Natural Resources show Foxconn will be a major new source of smog-forming pollution.

“I do not see a sound technical basis for the areas we are being directed to finalize in Wisconsin,” Jennifer Liljegren, an EPA scientist, wrote to colleagues in an April 11, 2018, email. “I am still in disbelief.” “Our final (metropolitan) area designation for Chicago is not the result of an analysis with any technical support,” Eric Svingen, an engineer in the EPA’s Chicago office, wrote in an April 24, 2018, email.

By dramatically reducing the size of areas required to crack down on dirty air, Pruitt overruled the agency’s career scientists...

In a few densely worded paragraphs buried at the end of a 63-page document, attorneys for the EPA and Justice Department asked a federal appeals court this month for what, in legal terms, amounts to a do-over ... they can see EPA data showing the region’s smog problems are getting worse, not better, and that polluters in four counties singled out by Pruitt for special treatment are contributing to chronically dirty air breathed by millions of people.

Republicans say leave the Lead in the Drinking Water: Apparently, Republicans don't seem to care how many children are poisoned by lead. In fact, they seem more concerned about dividing rural and urban voters over gets funding for getting the lead out.


Shepherd Express: Toxic rhetoric reached a new low this spring when Republican legislative leadership indicated they would not support a proposal from the new Democratic governor to replace lead pipes across the state because too much of the money would be going to Milwaukee ... Wisconsin Republicans are playing politics with something that quite literally is poisoning children in the state’s largest city.
Rep. John Nygren (R-Marinette), a powerful member of the Legislature’s Joint Finance Committee, said on Wednesday, April 10, “(I thought we'd) provide assistance at the local level, rather than people from Marinette funding lead replacements in Milwaukee. I’m not sure that that’s necessarily fair from a taxpayer standpoint. My understanding is that the proposal, a vast majority of it, is going to Milwaukee.

The infrastructure bringing water into people’s homes is a public safety threat, one that puts children and pregnant mothers at particular risk. Gov. Tony Evers is proposing to add a $40 million budget item to begin the process of replacing the 200,000 lead lateral service lines in Wisconsin, 77,000 of which are in Milwaukee. I’m not sure that that’s necessarily fair from a taxpayer standpoint.”

Data actually show the opposite. Milwaukee is subsidizing Marinette. Tax revenues ... going to the state are greater than the amount of money coming back to Milwaukee from the state.

A 2016 report by the Wisconsin Council on Children and Families relied on a 2015 Wisconsin Department of Health Services report, which reported on blood tests of children under 6 years old statewide ... noted that the statewide percentage of children tested who were diagnosed with elevated blood lead levels was 4.6 percent, a figure close to Flint’s 4.9 percent.

However, 2016 data show that the proportion of children tested who were lead poisoned in Wisconsin jumped to 5 percent — higher than Flint’s. That same year, 2.4 percent of Flint children tested had elevated blood lead levels at or above 5 micrograms per deciliter ... Milwaukee’s rate is even higher — four times higher than in Flint. In 2016, DHS data show 10.8 percent of Milwaukee children who were tested had elevated levels of lead in their blood. Those children accounted for nearly 60 percent of the 4,348 Wisconsin children found to be lead poisoned that year. DHS reports that half of all of the children with elevated blood lead levels that year were black. 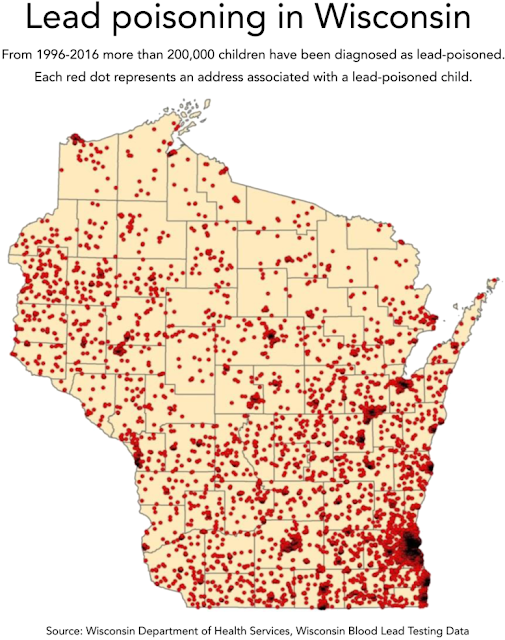