Wis GOP hands out Taxpayer money for Corporate Welfare without any expectation of creating Jobs!!!

If the WEDC were handing out social "welfare" benefits, Republicans would be demanding either the end of the agency or major cuts to staffing and funding.

But the Wisconsin Economic Development Corporation (WEDC), another Scott Walker idea that he was actually removed from, is corporate welfare at it's most irresponsible, what's not to like. And a big taxpayer money loser too. Remember that Friday on May 22, 2015...

Call it bad optics, but Scott Walker just got fired by his own party in the legislature. He's out as the WEDC chairman, a dysfunctional agency that bumbled job and business creation. Not a great story for someone hoping to run the whole damn country. WKOW's Greg Neumann:

Things haven't changed much at the WEDC. Gov. Tony Evers proposed ending it once, but the GOP lame duck session took his power away, allowing right wing think tanks to call it a broken promise.

During his campaign for governor, Evers said he planned to dissolve the quasi-public agency and return to a fully public model. A set of laws passed by the Republican Legislature during a lame-duck session in December gave lawmakers greater influence over WEDC and gave the WEDC board, not the governor, the authority to appoint the agency's CEO. Evers' power to appoint a CEO will be restored in September 2019.

Here are just a few new details from the Legislative Audit Bureau, an agency the Republicans wanted to eliminate because it continually made them look bad. It still is...:

1. The economic development corporation in recent years gave $61,000 to one entity for creating 261 jobs that were filled by people in 36 other states, none of them bordering Wisconsin, according to the review.
2. In another case, WEDC gave $462,000 in tax credits to an employer that lost 17 jobs, even though it was supposed to create employment under its deal with the state. Auditors did not name the company or others they mentioned in their report.

3. WEDC failed to determine how many jobs were created by companies that got state funds and tax credits, the audit found.
4. WEDC could have recovered $414,000 in tax credits and $4 million in loans for those projects but didn't, the audit found. "These taxpayer funds could then have been used to support other projects," the auditors wrote.

Kinda makes tells you what the agency was tasked to do all along, doesn't it: 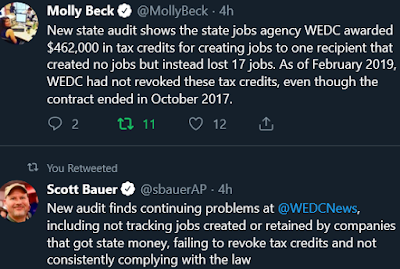 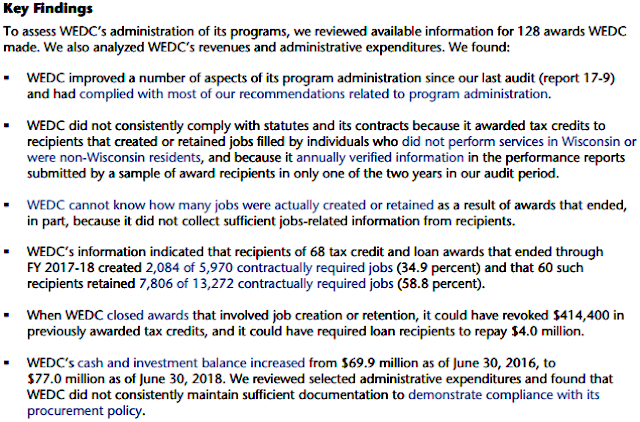