On unemployment, we've got a problem. Our meddling career politician Scott Walker, who still can't get over losing his job, has been doling out horrible advice to Gov. Tony Evers and the Rhode Island governor. He can't stop bragging about the unemployment numbers he got thanks to Obama's recovery plan after the Republican Great Recession. 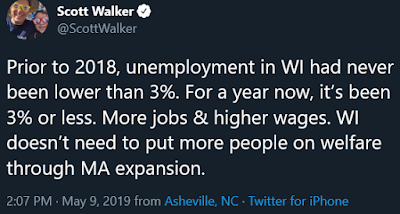 Making Unemployment Insurance Impossible to Get or Keep: Walker did everything he could to discourage and drop workers from their unemployment benefits. Other states went even further. Here's public radio's Marketplace report exposing the scheme to lower unemployment numbers, something Scott Walker exploited:

Here's are a few changes Walker put in place that are now being targeted by Gov. Evers for elimination or change:

2. A provision that makes people ineligible for benefits if fired for what the law defines as “substantial fault,” or failure to conform to a “reasonable” employer job policy ... recent court cases found it was improperly used to deny unemployment benefits to eligible applicants.

3. The administration has authority to define the types of job offers a person can reject and remain eligible for benefits.

4. Eliminating requirements adopted in 2015 that applicants submit to drug testing to receive jobless benefits. The most sweeping of those requirements has not yet taken effect due to federal delays.

5. If someone has more than one job and quits one of them, they are now ineligible to collect unemployment for the next year if they’re laid off from another job.

The changes were part of a scheme to cut business contributions into the insurance program and artificially make the numbers lower to look like we didn't have a problem in the eyes of the federal government. It worked too. Here's a link to Wisconsin efforts and other state's cuts to unemployment eligibility.

With a minimum wage of $7.25 and tough unemployment insurance requirements that include work requirements and drug testing for food and housing benefits, is it any surprise Wisconsin has a labor shortage and out migration problem.
Posted by John Peterson, Democurmudgeon at 5/10/2019 04:36:00 PM