Freedom? Republican Rep. Thiesfeldt: "Some families know more about this (vaccines) than the Doctors do."

Of all things, Republicans have been taking "freedom" and weaponizing it into something dangerous.

It's nothing new for those who, like little children, don't like being told what to do. They've been doing this by denying climate change, rolling back environmental protections, ignoring 39,000 gun deaths a year, and now...leaving the spread of communicable diseases up to parents who of course know better than their DOCTORS about the "dangers" of vaccinations?

We're pushing "freedom" now instead of public health? No wonder gun deaths, pollution, and repealing health care doesn't even faze Republicans, who have some whacked out idea of "freedom." And those victims who lose all their freedoms?

Republican Rep. Jeremey Thiesfeldt, who opposes Rep. Gordon Hintz’s bill that would repeal the personal waiver exemption for vaccinations, actually said this...go to 2:25 into clip near the end. Upfront:

"...these people are very well studied on this stuff. Doctors, you know I said I'm not a doctor, but when these people talk to me, and they way more about this stuff than I do, and for me to be able to tell them, you are forced to get this, even though you have this vast knowledge on this, I suspect some families know more about this than the doctors do."


No, families don't know more than their doctors, especially those who sought out and found alternative "facts" backing up their crazy idea's on Google from fellow anti-vaxxers and conspiracy theorists. This is what passes for governing?

Thiesfeldt, an anti-choice conservative, had the balls to say this...

Or this important issue tossed off as irrelevant by Thiesfeldt:


Host Adrienne Pedersen: "What do you think about that theory that it is a parents choice, but not getting your child vaccinated is possibly making a choice for another person's child?"

Thiesfedlt: "As a parent, my responsibility is for my own children ... Having the government come in and force me to put something in my body or in  my child's body that I believe to be harmful ... There are too may variables involved for us to just look at it as a requirement that everybody needs to do this."

Pumping the "freedom" and resent level up a few notches, Thiesfeldt came out defending whiny parents who feel victimized for own irresponsible decision. Hey, decision have consequences:

Thiesfeldt: "And predominantly, when I have had families come in and talk with me about this particular situation, they will come into me and tell me the stories of how they have been characterized as uncaring, uneducated, labeled as anti-vaxxers, and nothing further from the truth could be the case.

Here's one uneducated and uncaring victim of his own and father's dumb ass decision, which by the way, raises the issue of Trump new enforcement of the "conscience clause"... 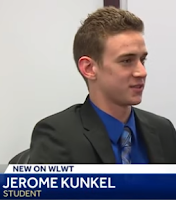 Jerome Kunkel, 18, a student at Our Lady of the Sacred Heart Assumption Academy, said he has deeply-held beliefs against being inoculated with the chickenpox vaccine, NBC News reports. He sued the health department in March, and lost.

“The fact that I can’t finish my senior year in basketball, like, our last couple of games, it’s pretty devastating,” Kunkel said at the time. “I don’t believe in that vaccine at all and they are trying to push it on us,” Kunkel’s father, Bill Kunkel said. He noted the vaccine was created from the tissue of two aborted fetuses. "As Christians we’re against abortion,” he added. He also bragged that as children, “we used to go to chickenpox parties.”

Well, the Catholic Church gave it's blessing, with this sound reasoning:


National Catholic Bioethics Center notes: One is morally free to use the vaccine regardless of its historical association with abortion. The reason is that the risk to public health, if one chooses not to vaccinate, outweighs the legitimate concern about the origins of the vaccine. This is especially important for parents, who have a moral obligation to protect the life and health of their children and those around them.


President Donald Trump during remarks on the National Day of Prayer, (announced he) finalized a new 440-page rule strengthening protections for healthcare workers who refuse to provide care that violates their religious or moral beliefs ... provides enforcement tools for 25 laws passed by Congress that are already on the books. "The regulation will allow anyone from a doctor to a receptionist to entities like hospitals and pharmacies to deny a patient critical — and sometimes lifesaving — care."

And no, doctor groups don't back Thiesfeldt's position:

Adrienne: Are you talking to any medical groups endorsing this?

Thiesfeldt: "The doctors were in my office the other day at the capitol, as well. I have heard them in the past, as well. The impression is that all doctors agree on this. Most of them do, certainly, but they all do not. I have talked to doctors who have had vaccination issues with their own children and have doubts."

Do doctors have doubts? Sure they do, but do they think putting "freedom" ahead of public health is a sane idea?

Public Sanity Crisis, Vaccines Pushed by Communists: Reseachers have looked at how anti-vaxxers got so convinced. Surprise, it all starts with the juvenile attitude someone is telling them what to do:

"Public confidence in vaccination is waning, driven in part by the manufacture of doubt by anti-vaccination activists and websites," writes a research team led by Isabel Rossen and Mark Hurlstone of the University of Western Australia. Their study aimed to determine who is vulnerable to anti-vaccination persuasion, and why. Rejecters and fence-sitters both scored high on the liberty foundation, meaning that both groups consist of people who really dislike being told what to do. The findings largely confirm those of a 2017 study in Nature Human Behavior, which found that parents who were very wary of vaccination were twice as likely to endorse the moral foundations of purity and liberty than those who accepted the practice.

The parents who are worried or sure about grave risks from vaccines reflect a broader horror that has flickered or flared in everything from the birther movement to “Pizzagate,” that nonsense about children as Democratic sex slaves in the imagined basement of a Washington pizza joint. Their recklessness and the attendant re-emergence of measles aren’t just a public health crisis. They’re a public sanity one, emblematic of too many people’s willful disregard of evidence, proud suspicion of expertise and estrangement from reason.

A Republican state Rep. in Arizona said on her Facebook page that pressure on parents to vaccinate children “is not based on American values but, rather, Communist.”

They fly ever more stubbornly in the face of sophisticated research and hard-earned knowledge. Beneficiaries of wisdom that prior generations lacked, they toss it away, wasting and mocking progress itself.
There’s also a man in the White House, at the Resolute Desk, who makes grand pronouncements based on random conversations; implores Americans to distrust traditional institutions and conventional sources of information; and promotes conspiracy theories. He has specifically echoed and validated the apprehensions of anti-vaxxers. Whether he’s symptom or cause doesn’t matter. He’s dangerous either way.

Times Magazine's Jonathan Mahler noted “a radical new relationship between citizen and truth.” He wrote that millions of people “are abandoning traditional sources of information, from the government to the institutional media, in favor of a D.I.Y. approach to fact-finding.” They turn to the internet, which is both a hall of mirrors and an overstuffed bazaar. It lets them customize their input and thus tailor their reality, which is reinforced by the like-minded company they keep online. They become surer that climate change is a hoax, that the deep state plots against the bold warriors who threaten it ... and they open the floodgates to so much fiction that fact is swept away.