Christian conservatives see something wonderful in the cult of Trump, and his brutal, resentful, racist attacks on immigrants who they say keep lowering wages and taking advantage of taxpayer services.

Even working American's of Mexican descent.


Trump's Wisconsin is now a dangerous territory thanks to Scott Walker's 8 years of politically motivated anger and coded race bating, pitting us against "them," whoever he defined as "them" at the time.

It's now playing out in Wisconsin Rapids. Receiving almost no press state or nationwide, this is just another symptom of the Trump infested hated spreading everywhere. Here's what some students often quote from Trump, as explained by Spanish teacher Olga Meza:

Olga Meza: "...they said 'Oh well, all Mexicans are criminals, and all Mexicans are drug dealers,' and I'll say no, it's not true.  Like I'm Mexican American, my parents are from Mexico, and they didn't come here to do that."


WAOW: A Spanish teacher at Assumption Catholic School said an incident on Thursday was her turning point. Olga Meza is a Spanish teacher and first-generation American. She said her parents came from Mexico, she was born in Chicago, and she grew up in Wisconsin. Now, she’s a proud mother of two.

On Thursday, Meza walked into her classroom at Assumption Catholic School to see photos of Donald Trump plastered across the room and the phrase “you’re fired” on the whiteboard. She said they also changed the screens on 22 different iPads to show Trump’s face.

School Administration called it a “senior prank.” Meza said, “I mean, I don’t even have any seniors… and they have so much hate against me and I don’t understand why.”

It’s not the first time Mr. Trump has been brought up in the classroom. She said students often quote the president in class. “They say Mexicans are criminals and all Mexicans are drug dealers and I was like that’s not true. I’m a Mexican American, my parents are from Mexico and they didn’t come here to do that, they taught us.”

Meza said as soon as other teachers at the school heard about what happened, they offered support. “They actually offered to clean the room up because they felt horrible,” she said.

Christians don't care what Trump does because he's passing divisive religion based exemptions based on belief and conscience that allow for discrimination. While Christians don't like being singled out by comedians, Trump's praise for N. Korea is perfectly acceptable. 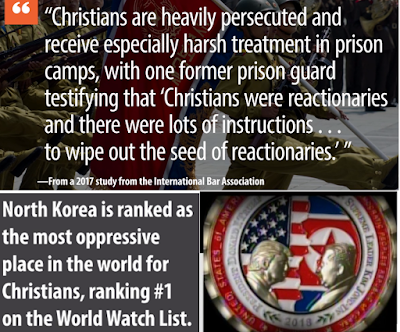 Just like in Wisconsin Rapids, the Catholic branch of Christians, especially white, have been moving toward Trump:

Catholics voted for Democrats (50%) and Republicans (49%) in 2018 elections for the U.S. House of Representatives. White Catholics are more likely to vote Republican, while Hispanic Catholics overwhelmingly back Democrats.