My conservative Trumpian friend in Milwaukee was quick to send me the video of 33 yr old Cheryl Justice Anderson, who told her story explaining that she didn't have access to a family doctor (unknown reason why), and how one ER "brushed her off" forcing her to go to 3 ER's.

The Horrors of Socialized Health Care...in Canada? My friend loves anecdotal stories, one here, one there, to paint an entire system like Canada's health care system a failure. Of course I also mentioned we have a few horror stories of our own in the U.S., but he didn't care.

Few people know that the Province of Nova Scotia, like every other province in Canada, has control of their own system, with national guidelines. Some provinces are better than others. My sister lived in Canada a number of years and told me that one province was horrible, while others were great.

A US Horror Story: Medicare covers all seniors at a low negotiated price, and that's good, but it's also been compromised by private sector profiteers looking to make money off retirees. So a Rube Goldberg set of rules were constructed to put a patient and their relatives hard earned cash on the line, and into the pockets of hospitals and insurance companies.

The following is such a story. But first, keep in mind, (1) the best Democratic Medicare-for-All proposals don't include the failings of our current system. (2) Imagine too how different things would be if we had just had a "public option" in the ACA. (3) And if we had the time, and people weren't currently dying under our current system, I would love to institute a Medicare buy-in option that progressives, liberals, socialists, and Democrats would take in a heartbeat, while giving rugged Republican individualists who love their current obscenely costly private insurance the option to stay in their own plans. We'll see how long that lasts. 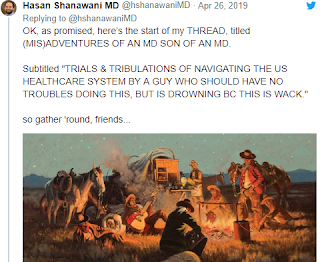 Dr. Hasan Shanawani, a high-ranking physician at the Department of Veterans Affairs, was overcome by frustration over his 83-year-old father, also a physician, who was hospitalized in New Jersey with a spinal fracture. Like millions of people who are sick or old and the families who care for them, this physician was disheartened by the health care system’s complexity and its all-too-frequent absence of caring and compassion.

Shanawani Tweet: “The threads I will share w/U will be about the RIDICULOUS stuff I have had 2 navigate in my dad's care.” Hospital staff didn’t acknowledge his family’s concerns or address them adequately: How can an old man with terminal prostate cancer and a broken back be sent home without measures to ensure his safety?

1. His dad was classified as an “observation care” patient. Why was his dad, who had metastatic stage 4 prostate cancer and an unstable spine, not considered eligible for a hospital admission? When someone is in observation care, he or she can face copayments for individual tests and medical services under Medicare Part B — expenses that can quickly add up. Also, Medicare will not pay for short-term rehabilitation in a skilled nursing facility for observation care patients.

2. Currently, patients with Medicare coverage cannot appeal a hospital’s decision to place them in observation care. 3. Sidestepping Shanawani’s questions, the care coordinator didn’t provide answers. Later, another senior nurse in the hospital unit didn’t respond when he asked her to find out what was going on.

4. No one seemed to care or be willing to listen: When family members asked that lower doses of painkillers be administered to Shanawani’s father, who had become delirious during previous hospitalizations, they felt nurses were disapproving and disrespectful.

5. Shanawani’s father and the family decided against surgery but were told that he couldn’t receive a brace in the hospital because that option was available only to inpatients.

6. Outside the hospital, it would take time to arrange an appointment with a spine specialist and get a brace. In the meantime, with an unstable spine, “my father was at risk of permanent paralysis,” Shanawani said.

7. “I wish I could say that this was in any way unique or an isolated event,” said Dr. Richard Levin, chief executive of the Arnold P. Gold Foundation, which focuses on humanism in health care, who reviewed the physician’s Twitter stream. “But his description of a broken system is so common.”

On April 30, his father took a turn for the worse and was rehospitalized. Shanawani knew this was likely at some point, but he had hoped it wouldn’t be so soon. “It starts all over again,” he wrote to me in an email.