Trump's not even trying to secure U.S. Elections from Foreign enemies!!!

You may not have heard about it, but the International Grand Committee on Big Data, Privacy, and Democracy is meeting in Canada to do something about things like interfering in other countries elections, like Russia's successful effort to install Trump. But Trump's America isn't interested.

You can thank this Republican Trump appeaser: 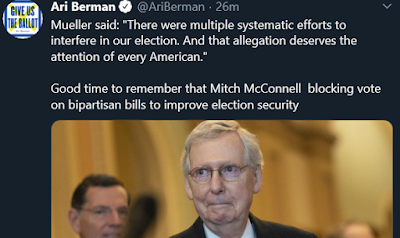 The special counsel’s report concluded that the Russian government interfered in the 2016 election “in sweeping and systematic fashion,” leading to the indictment of 34 individuals and three Russian businesses on charges ranging from computer hacking to conspiracy and financial crimes. Those indictments led to seven guilty pleas.

Fox News Alert: Another Trump appeaser, Bret Baier, announced today to Fox viewers just what the Mueller investigation was all about. Really, you're bringing that up now?


Trump not Involved; Election Integrity, Security, and Foreign Interference? Forget it: Here's why I'm posting this; check out this jaw dropping, incredibly irresponsible inaction to save our own representative democracy's electoral system from enemy countries.


The International Grand Committee on Big Data, Privacy, and Democracy, a unique collaboration between lawmakers determined to bring greater accountability to large online platforms, convenes in Ottawa this week ... events from Russia’s online influence campaign ahead of the 2016 U.S. presidential election to the live-streamed massacre at two mosques in Christchurch, have spawned a global “techlash.”

1. The members ... hail from a number of countries concerned about the effects of information technology on their nations’ social and political life, including Argentina, Canada, Chile, France, Germany, Ireland, Latvia, Singapore, Ukraine, and the United Kingdom. Not one of the 130 U.S. lawmakers asked to participate in today’s grand committee meeting accepted the invitation.

2. Just two weeks ago, the U.S. refused to sign onto the “Christchurch Call,” a non-binding agreement between governments and tech companies to better police the harmful content that too often makes its way online. With the U.S. on the sidelines, other countries have become the de facto regulators of American tech companies, introducing new rules governing online advertising and digital privacy, taking a tough approach to protecting competition in the technology sector, and issuing fines against companies that exploit their market power to entrench their dominance.

3. With many of these countries confronting upcoming elections, their lawmakers gather to question representatives from Facebook, Google, and Twitter on data security, user privacy, and foreign influence campaigns ... an international chorus has declared the end to an era of self-regulation.
4. While Australia, Canada, the European Union, France, Germany, New Zealand, and the United Kingdom among others have passed new laws regulating online privacy and harmful content, commissioned reports on disinformation and journalism in the digital age, and levied steep fines against tech firms, the United States remains notably absent from this international movement.

4. As online platforms use journalistic content to attract and engage users, (these) platforms threaten the economic viability of media organizations whose content they circulate ... reports commissioned by Australia’s competition enforcement agency and the British government argue that online platforms pose a serious threat to the provision of news and propose ways to sustain journalism. U.S. lawmakers, meanwhile, have not focused on the industry’s survival in the digital age.

5. A new report by Brookings' Clara Hendrickson and Senior Fellow Bill Galston outline the major political and economic threats posed by today’s largest online platforms ... For years, U.S. lawmakers feared intervening in one of the most dynamic sectors in the economy. However, few can deny the mounting evidence revealing large technology platforms exacerbate political vulnerabilities that threaten a healthy democracy and the tech sector’s concentration slows and stifles innovation. As U.S. lawmakers and enforcers consider regulatory and antitrust action of their own, they can draw on the experience of other democratic governments around the world. The “Big Tech Threats: Making Sense of the International Backlash Against Online Platforms” paper released today, can serve as a guide.