"Our Great Patriotic Farmers" never had anything to do with the US trade war with China. Farmers were thrown into the front lines of this tariff war via politics so China could hurt Trump's voter base.

This was all Trump's fault, and the press isn't shining a bright enough light on this.

And yet, not even Trump seems to be aware this, as revealed here in one of his latest tweets. No, they will not "be one of the biggest beneficiaries." 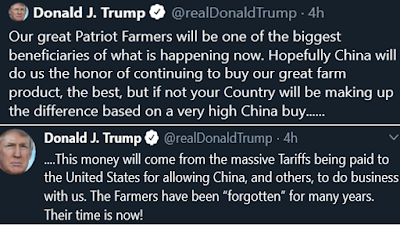 Socialist Farm Subsidies? Yes: So our tax dollars are now going to be distributed again to farmers because they vote Republican? Remember, most of the subsidies went to large corporate farms, and what subsidies did go to smaller farmers were a drop in the bucket compared to their actual debt. Here are some of the twitter comments...


1. The Chinese buyers will find other suppliers so Trump better be ready to pay off the farmers forever!

2.  You made it worse for the farmers not better! RESIGN. ... Meh. Farmers voted him in. Let them reap what they sowed. Maybe they’ll do a little research before they cast their next vote.

3.  “Patriot Farmers?” Or as the GOP would have called them if the Democrats had created this mess “Welfare Kings.”

4.  1. U.S. companies pay for tariffs; then taxpayers pay tariffs when those companies pass on the costs to consumers. 2. Hoping to be seen as a savior, you've now created a Socialist program for farmers that taxpayers will also pay for. And here's the rub: Trump pays NO taxes.

5.  I just checked: China owns more than $1.1 Trillion in U.S. Govt debt. In other words, they are lending us the money (at interest of course) to pay Welfare for Farmers.

Note: Tariffs have also hiked farm equipment prices to unsustainable levels do to tariffs on steel and aluminum:


Brent Bible, a farmer, has nowhere to sell his soybean and corn crops. And that situation just got worse, because the futures trading market started planning for higher tariffs earlier this week, Bible said. "Just in the last three days of trading, we've seen the price reduction that equates to about a $50,000 loss for us," he added.

Bible isn't just running a business, he's also a consumer, and increased tariffs on steel and aluminum have raised prices on tractors and farm equipment he needs. As both a supplier and a consumer, he says tariffs are hitting him on both ends.

Trump, friend of the farmer voter base? Not so much:

Trump will leave farmers with...?


"If the trade conflict with China continues much longer, it will likely leave lasting scars on the entire agricultural sector as well as the overall U.S. economy," Amanda Countryman, an associate professor of agricultural economics at Colorado State University, wrote for the Conversation in 2018.

And then there's this:

This latest round of tariffs will add another $500 a year in costs for the average American household, says Katheryn Russ, an economics professor at the University of California at Davis. And that could grow. "Once the tariffs go onto cellphones, I mean then you're going to see people scream," she says.