When you solve an ever day problem, have you ever classified that solution as liberal or conservative. Nope.

And that's where I've been for years, an apolitical problem solver.

Sure, you've seen me attack Republican policy because what they're doing is strictly partisan. Plus it's a criticism of right wing messaging and framing that dominates how things are reported. It's a tactic to vilify policy.

This is what I'm talking about...labeling popular and legitimate fact based solutions as "liberal" policies?

I don't recall ever reading what Walker and the Republicans did as "conservative" policy?

We are now automatically describing everything from a conservative point of view, and shuddering at the thought of extreme "liberal" ideas. The truth... 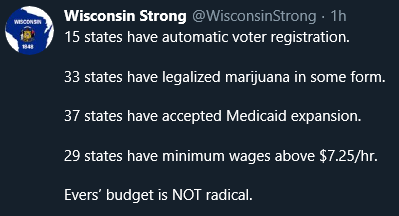 Just ask a "stand with Walker" voter to name one major state problem he solved as governor. Walker  passed every "conservative" political theory on his check list, but ignored real problems. It's a mind boggling list Walker just flat out didn't think was important to his agenda;