We are now witnessing the kind of country Republicans have been pushing for in the last 40 years. Make no mistake, the following steps to demolish our representative democracy is on the Republicans.

The U.S. Supreme Court is now stacked with conservative justices that will predictably vote in favor of their predetermined agenda.

Citizens United Chaos: Think about it, the activist conservative court got to see what happened after their decisions, and the chaos introduced by Citizens United alone. It was based on the 14th Amendment's all "citizens born" and "naturalized"...does that describe corporations? Or does that sound more like a living constitutional interpretation, the kind conservatives hate so much? 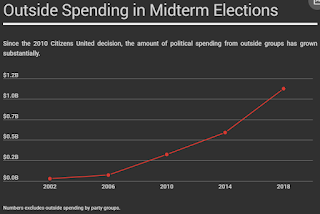 
The dissent: "Although they make enormous contributions to our society, corporations are not actually members of it. They cannot vote or run for office. Because they may be managed and controlled by nonresidents, their interests may conflict in fundamental respects with the interests of eligible voters."

The Second Amendment Chaos: Literalists/Strict Constructionism "refers to a particular legal philosophy of judicial interpretation that limits or restricts judicial interpretation." Where does the amendment specifically mention "guns?" It doesn't, but even if it did, conservative Justices again used a "living constitutional" interpretation saying the old muskets back then are equivalent to high velocity automatic or semi-automatic weapons today. That's strict constructionism? In fact, they rewrote the Second Amendment, as noted below. Now the Justices are getting to see the result of their activist ideological legislation from the bench:


The collective side thinks the amendment gives each state the right to maintain and train formal militia units that can provide protection against an oppressive federal government. They argue the "well-regulated militia" clause clearly means the right to bear arms should only be given to these organized groups ... the federal government cannot abolish state militias.

The individualists believe the amendment's militia clause was never meant to restrict each citizen's rights to bear arms. Those supporting an individual's right to own a gun argue that the Second Amendment should give all citizens, not just members of a militia, the right to own a gun.

Cases heard before 1900 cemented the court's opinion that the Bill of Rights, and specifically the Second Amendment, does not prohibit states from setting their own rules on gun ownership.

In the District of Columbia v. Heller in 2008 ... the Supreme Court ruled that despite state laws, individuals who were not part of a state militia did have the right to bear arms. As part of its ruling, the court wrote, "The Second Amendment protects an individual right to possess a firearm unconnected with service in a militia, and to use that arm for traditionally lawful purposes, such as self-defense within the home."

The Justices must be proud of this one:


Gun deaths in the U.S. have reached a record high, according to new data from the Centers for Disease Control and Prevention (CDC). According to the research,39,773 people were fatally shot in 2017, a figure that has grown by more than 10,000 people since 1999.

The Voting Rights Act Debacle: Who knew that racism died 50 years ago, and that outdated laws like the Voting Rights Act were no longer needed. Well, after the conservative activist Supreme Court gutted the Act, they should have witnessed the sudden onslaught of voting restrictions nationwide in Republicans states allowing specific demographic targeting of voters. No concerns...again:


Chief Justice John Roberts voted in the majority in striking down elements of the Voting Rights Act in a 2013 case. Chief Justice Roberts wrote that ”our country has changed,” and that blanket federal protection wasn’t needed to stop discrimination.

8 of the 15 states, or 53 percent, passed or implemented voting restrictions since June 25, compared to 3 of 35 states that were not covered under Section 5—or less than 9 percent.

Gerrymandering's Slip into One Party Rule: I predict that allowing politicians to pick their voters instead of the other way around, is the next poison pill getting the conservative activist thumbs up. Once they rule that it's okay for elected politicians to protect their power and turf, the story of the U.S. will be taking an even uglier turn. They will again witness, without concern, the chaos their decision will have on the nation.


With Kennedy replaced on the bench by Justice Brett Kavanaugh, most experts agree new limits on gerrymandering are no more likely this time around. Legal experts suspect the Supreme Court will decide that political maps need to be resolved by state legislatures, not courts—opening up the possibility of more blatant gerrymandering for the foreseeable future.

Legal experts think it’s unlikely that SCOTUS will punt on the issue this time around. As Talking Points Memo notes, procedural shortcomings in previous cases have been addressed, the facts being presented are clear, and the court has packaged the two separate cases together to “hear all the possible perspectives on what a judicially reasonable standard for determining a partisan gerrymandering might be.”

"The case presents the most extreme, overt and brutal partisan gerrymander this court — or any other court — has ever seen," said Emmet Bondurant, the attorney for Common Cause, which sued to have the North Carolina map thrown out.

But Jason Torchinsky, an attorney with the National Republican Redistricting Trust, a GOP group, said the Supreme Court shouldn’t try to take politics out of the redistricting process, as long as legislators don’t draw complicated districts that split cities and counties or aren’t otherwise logical. “Is drawing for political success okay? As long as you’ve respected other districting principles, I think the answer is yes,” said Torchinsky.

“If the court doesn’t step in here, then what you saw in North Carolina and what you saw in Maryland is the new normal. It becomes ‘Mad Max’ territory,” said Levitt. “It is abundantly clear that the legislators can’t police themselves.”