What didn't get any attention at all was this striking minimum wage reality that would make anybody think twice about coming here: 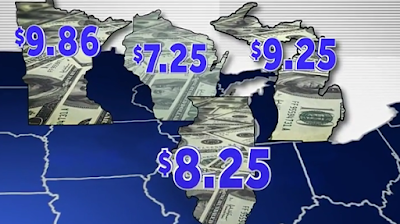 Guess we're not going to be seeing caravans of unemployed millennial's crossing the southern border of our state anytime soon.

Evers proposed gradual minimum wage hike to $15 is once again, according to Republicans, a business disaster and job killer. Yet there's living proof that didn't happen in Washington state:


Seattle, since 2014 ... shows that workers made more money— but that experienced workers made out the best. The study found that the increase added about $10 per week on average ... even while reducing weekly hours slightly...

Employee turnover decreased ... at the cost of reduced opportunity for the inexperienced," the study's authors wrote. (But)...The Economic Policy Institute says problems with the study haven't been fixed ... Since it defines "new entrant" as someone making less than $15 an hour ... the study would count someone who got hired at $16 or $17 an hour as a lost job instead of a better one.

Enter the UW's new Alternative "Facts" Research Facility? But wait, Republicans have a UW-Madison professor up their sleeve now. The talk show Upfront never mentioned this about Prof. Noah Williams, who's featured in their story on the minimum wage below:


Williams is director of the Center for Research on the Wisconsin Economy, established in July. Funding for the center includes $240,000 from the Charles Koch Foundation and $100,000 from the Bradley Foundation ... Williams was an adviser to Walker’s presidential campaign, the Associated Press reported. Williams published a report concluding that another existing tax credit backed by Walker helped grow manufacturing jobs in the state.

Williams’ analysis of the controversial Foxconn plant proposal concluded that the high-tech plant could return nearly $4 for every $1 of a proposed $3 billion state tax subsidy...

First, anyone notice a distinct research pattern from Williams that seems to always come up GOP positive, like this from last week trashing Gov. Evers plan to expand Medicaid (BadgerCare):


Republican lawmakers are touting a health care study, by the conservative WILL and UW-Madison economics professor Noah Williams, (that) found expanding Medicaid in 2020 would increase private insurance consumer costs ... a conclusions (that) drew sharp criticism from Donna Friedsam, health policy programs director of UW-Madison’s Population Health Institute. “This study has several methodological and analytical flaws that substantially compromise the validity of its conclusions” ... pointed to mathematical errors and problems with the study’s conclusion that health care spending is higher in Medicaid expansion states. Friesam added most economists reject the reasoning that private sector health care costs would increase...

Getting back to the Upfront video clip, conservative special interest lobbyists at the Wisconsin Restaurant Association had the balls to whine about this...:


Wisconsin Restaurant Association: "...so it's always concerning to our members when they hear the government is going to artificially raise the rates..."

Hold on, wages have flat-lined for decades, yet big business just got a major Trump corporate tax cut along with multiple tax cuts for the wealthy. Nothing artificial about that government action? 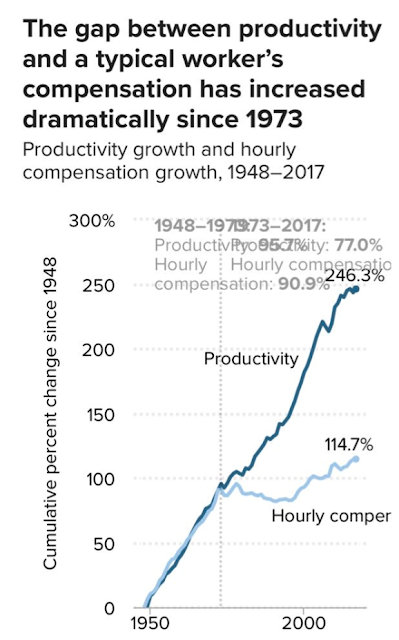 I am the proud father of 2 sons, 16 and 20, and I blow a gasket every time I hear a Republican devalue their incredible lives by saying that because they lack inexperience, they aren't worth a decent wage.

My 16 year old, who recently started a weekend food service job, registered surprise when he saw $400 in his own checking account, money he made. It was that moment when I realized; like everyone else, once you get a taste of earning an income, you want to work harder and make more. That's human nature, that's the real motivation, not a mandated government work requirement by a Republican who doesn't think young workers are worth it.
Posted by John Peterson, Democurmudgeon at 3/11/2019 12:49:00 PM